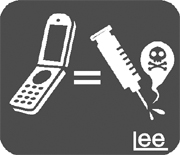 Workaholic attorney Samantha Sweeting finds herself in a spa for a tranquility treatment with a gift voucher she received a year ago, only to freak out when she learns that all electronic products are banned from the facility. Unable to survive without her BlackBerry, Samantha smuggles it in under a towel and takes messages while receiving a massage.

When her masseur accuses her of being addicted to electronic devices and e-mail, Samantha thinks, “I’m not obsessed. I only check my e-mail about every thirty seconds.”

Grumbling as she races out of the room to return to the real world, she thinks to herself, “If they want us to relax, these people should let us keep our BlackBerrys and not confiscate them.”

The opening scene of “The Undomestic Goddess” by Sophie Kinsella is an account of a typical urban networker whose business and personal lifeline is the small screen and cramped keyboard of a wireless handheld device.

Bette Jacobs, the dean of Georgetown University School of Nursing and Health Studies confessed she suffers from severe thumb pain due to excessive “thumbing” from sending e-mails from her wireless device. She recalled she answered more than 150 e-mails during a 10-hour conference.

Samantha and Bette both fit the stereotype of the so-called “CrackBerry,” a coinage describing just how addictive the BlackBerry device is.

According to RIM, approximately 21 million people use the BlackBerry. The phones are generally referred to as “Berries,” which branched out to a litany of coinages. The word “BlackBerry” can simply be used as a verb to send e-mails via a wireless device, in the same way “to Google” refers to searching the Internet. The U.S. media recently added a new word to the list of BlackBerry offshoots: “BarackBerry” was conceived from the new American president’s inability to be separated from his BlackBerry at all times during his presidential campaign.

President Obama recently popped into the White House press office to announce that he has won his BlackBerry battle and that he can continue to use his as president. He had feared he would have to surrender his beloved portable device for security reasons.

All the BlackBerry coinages point to the device’s addictive workaholic users. But it isn’t such a bad thing to have a workaholic president who will willingly forgo his personal time to connect and network with the public and employ portable devices to help arrive at speedier decisions.