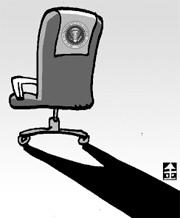 It isn’t easy for a president to live as an ex-president. When asked how former presidents spend their time, Herbert Hoover said, “Madame, we spend our days taking pills and dedicating libraries.”

More successful leaders like Dwight Eisenhower, considered by scholars as one of the greatest U.S. presidents, is also known to have suffered mild depression toward the end of his term. Watching people building the stage for the inauguration of his successor, John F. Kennedy, the former World War II hero groaned, “I feel like the fellow in jail who is watching his scaffold being built.”

Dean Atchison, Harry Truman’s state secretary, likened the lingering feeling of leaving office to the pang in the heart after a painful breakup.

Letting go of sovereign power would be as gut-wrenching and heart-piercing as bidding farewell to a loved one.

But for some, post-presidency days had proved more successful and lucrative than their days in power. Bill Clinton made the most of his charisma and smooth tongue after leaving the Oval Office as much as he enjoyed being in office. He opened an office in New York and gave speeches and reported last year that he and his wife, Hillary Clinton, had earned $190 million in the eight years after leaving the White House. That figure amounts to over 150 billion won.

But Clinton falls short of Ronald Reagan as a remunerative public speaker. Reagan, famous for jibing and humorous storytelling, earned $2 million for making 20-minute speeches twice in Japan in 1989. This equates to around $50,000 per minute.

Gerald Ford, who was virtually given the presidency after Richard Nixon resigned in disgrace, had it easy after his presidency as well. He served on the boards of numerous corporations after retirement, earning money enough to pay off debts and even save $300 million. He shrugged off critics, saying he was now an ordinary American citizen.

Of course there were others who moved on to rise in stature through nobler deeds. Jimmy Carter is often regarded as the model ex-president; he traveled the globe more after retirement than as president, mediating disputes for world peace, ensuring democratic elections and building houses for the poor. Once-dubbed as a failure during his presidency, Carter received a Nobel Peace Prize for advocacy of democracy and human rights.

A lot must have been going through George W. Bush’s head as he moved back home to Texas. Given the public jeering and worldwide outcry over his failed Iraq campaign, a Nobel Peace Prize isn’t quite on the cards.

Baseball may be more up his alley than mediating for world peace. As a former owner of the Texas Rangers, Bush may be fit for the commissioner’s job in Major League Baseball. He should, as Foreign Policy journal suggested, get together with ailing Cuban President Fidel Castro and discuss “baseball diplomacy.”

But whatever he does, he can’t do worse than ex-presidents in Korea who still live in the shadow of the past and exacerbate political confusion.