In fashion, one day you’re in - airing in Korea, that is

In fashion, one day you’re in - airing in Korea, that is 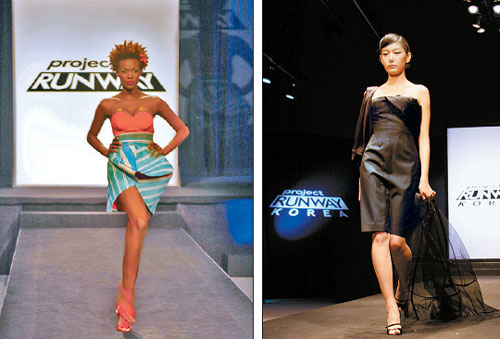 The original American version of the reality show “Project Runway,” left, and the Korean version. Provided by On Media

The show, which pits 12 contestants against each other to win a fashion design contest, is almost identical to the original American hit program “Project Runway.”

And the Korean version doesn’t just copy the premise - contestants completing one design challenge per week - but also its format, including the set design and camera angles.

Like the original, finalists will present their work at Korean fashion week in the fall and the winner of will receive cash to start a fashion line.

In fact, staff at Project Runway Korea say that “everything about the two shows is the same except for the color of the contestants’ skin.”

Project Runway Korea’s production company paid 100 million won ($71,900) to FremantleMedia, the show’s international distributor, for the right to import the show’s theme and format. Little wonder, then, that the Korean show is a fair imitation.

After the Korean production company imported the format last May, staff received a 700-page “bible” based on the original Project Runway.

The book states guidelines for making the show, including set design, the type of equipment used and how to select contestants.

In fact, one of the contract agreements in importing the show was that the Korean version would adhere to the guidelines.

To help the Korean production company make the show, two producers from FremantleMedia visited Korea and held a two-day workshop.

“We [Project Runway Korea staff] faced many challenges in trying to follow the guidelines,” says Lee Woo-chul, the show’s producer.

“Since the environment and culture of making the show are different, we had many limitations.”

For example, while each episode of the American show was shot with a budget of 500 million won, the Korean show was given only 700 million won for all 10 episodes. Currently, nine episodes of the reality show have been shot.

Also, while the contestants of the American show received the necessary materials such as pattern muslin through sponsorship from popular fashion companies, the Korean contestants had to visit Dongdaemun market themselves.

There was also difficulty in selecting the right host.

According to the guidelines, the host doesn’t have to be a model but should be a recognized public figure.

Staff initially asked FremantleMedia if Kang Ho-dong, a well-known comedian and host of many local variety shows, could be the host but Fremantle said it would be inappropriate for a comedian to host a fashion-related show.