Korea was shocked by the news last month that actress Jun Ji-hyun’s cell phone had been cloned by her management company so that it could keep an eye on her. The case played into the fears of many that the digital devices that have become such an indispensable part of our lives can also serve to violate our privacy.

But, of course, once the movies get ahold of this idea, all of our worst fears get taken to the next level, as they do in the thriller “Handphone,” which comes out at local theaters on Feb. 19.

“The film is full of suspense,” said director Kim Han-min at a recent press conference at the Seoul Plaza Hotel. Kim directed “Paradise Murdered” (2007), another thriller that attracted more than 2.2 million viewers.

“Though the film belongs to the thriller genre, it doesn’t depend on crime or revenge; it’s more reality-based suspense,” the director added. 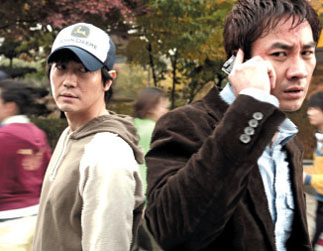 Treading well-travelled ground, Handphone tells the story of struggling talent manager Seung-min (Uhm Tae-woong), who is unfortunate enough to go through an experience that many have had before - he loses his cell phone.

For Seung-min, losing his phone means losing his business lifeline. To make matters worse, just before the cell went AWOL, the ex-boyfriend of one of his top actresses had just sent him a sex video of the girl, threatening blackmail.

Seung-min and his company are strapped for cash, and a multibillion won contract Jin-ah has just won represents their last hope for success.

The concern is, of course, that the person who finds the phone will realize the illicit opportunity that its contents represent if they are released to the public in the right way.

An anonymous man (played by Park Yong-woo) ends up finding the phone. Typically, he gives off a friendly, easygoing vibe to begin with, but as anyone who has seen this type of plot play out before, a darker side lurks in the shadows. Rest assured that Seung-min will be made to jump through some hoops if he hopes to get the phone back.

As part of its realistic approach, the movie doesn’t simply make the nameless phone finder out to be an evil guy who should be punished. Instead, things are more nuanced, leaving the audience with pangs of pity for him.

Explaining his motivation behind making the film, Kim said, “An ordinary experience can turn dramatic.”

Uhm let it be known that when Kim makes a movie, he maintains a strict professionalism. “Kim is full of emotion, but when he works, he turns strictly objective,” Uhm said.

“The film is an interactive thriller - everyone can relate to the story, especially Koreans,” the director said.

According to production company Cinetory, 45 million Koreans have mobiles. Of those, 1.5 million lose their phones every year, a statistic that includes actors Uhm and Park.

“Life was chaos with no access to my cell,” Uhm said. “I had no contacts at all since these days, not many people memorize numbers anymore.”

For Park, the movie rang particularly true. He recounted a time that he was so drunk that he forgot his phone in a taxi.

“The next day, the phone was dead and I never got it back,” he said, noting that he was nervous that information saved in the cell - including photos of his girlfriend - would be leaked.