<font color=F88F06 size=3>[Talk of the town]</font><br>For one celebrity impersonator, the gig is up with Supreme Court fine

[Talk of the town]
For one celebrity impersonator, the gig is up with Supreme Court fine 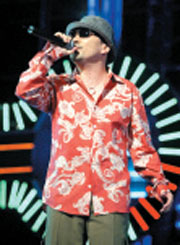 Impersonations of popular celebrities have always been part and parcel of the entertainment scene. But sometimes the joke can backfire.

Two years ago, pop singer Park Sang-min filed a lawsuit against an impersonator only known as Lim, 42. The Supreme Court recently found Lim guilty of embezzlement and falsely using the pop singer’s name. Lim has been fined 7 million won ($5,033).

Lim apparently dressed to resemble Park by growing a beard, wearing a felt hat and singing in nightclubs without disclosing he was an impersonator.