In the footsteps of refugees

In the footsteps of refugees 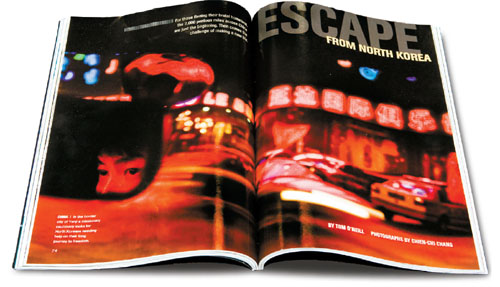 It is said that many Americans who move to another location would most certainly pack their Bible and a copy of National Geographic magazine.

Published by the National Geographic Society, which was established in 1888, the magazine has become a source of information encompassing nature, science, history and society.

The February issue features a 26-page item on North Korean refugees titled “Escape from North Korea.” It was written by Tom O’Neill, a senior National Geographic writer who has covered topics as diverse as Nigerian oil, Japanese samurai and the Brothers Grimm.

In 2003, O’Neill wrote “DMZ: Korea’s Dangerous Divide” to mark the 50th anniversary of the truce in the Korean War.

This time, O’Neill and Lee So-young, his South Korean wife, went undercover posing as tourists on honeymoon to follow three refugees - code-named Red, White and Black for security - from China to Laos, Thailand and South Korea.

It was thanks to Pastor Chun Ki-won of the Durihana Mission in Seoul that O’Neill and Lee could meet the refugees.

Considering the influence of the magazine, the story could have significant repercussions in U.S. politics. The timing of the story’s publication overlaps with the first weeks of Barack Obama’s presidency in the United States.

If anything, it would be a surprise if the story, on North Korean refugees subject to hardship and desperation, did not affect the relationship between North Korea, South Korea and the United States.

O’Neill spoke with the JoongAng Sunday by telephone.


Q. South Koreans are aware of the serious nature of the refugee problem. However, there are limits to what individual citizens can do. Moreover, the economic crisis that has hit South Koreans has made caring for less fortunate people less of a priority. What should be done so that Korean society becomes more active in helping solve the refugee issue?

A. It is necessary to meet with the refugees in person and listen to their stories. More than 50,000 North Korean refugees who are hiding in China are facing serious threats and hardship. About 75 percent of the refugees are women. A considerable number of them are denied even a modicum of freedom and work in miserable conditions such as sex chat rooms.

As of now, about 15,000 refugees or about 2,000 annually have succeeded in reaching South Korea. They are still isolated in the land of their brethren and they are not free from fears. Members of South Korean society should become more compassionate toward the plight of refugees from North Korea. Dialogue is necessary. 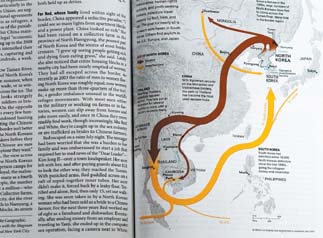 Top: The opening pages of “Escape from North Korea.” Above: A map in the story that illustrates the escape routes of the refugees. [JoongAng Sunday]

For refugees from North Korea, telling their stories to South Koreans can be a good way of overcoming isolation and fear.


How will the Obama presidency address the North Korean refugee issue?

Obama has already expressed deep concern for the refugee issue. Last year in May, he sent a letter to a Korean?American Christian organization in the United States. He urged for the human rights of North Korean refugees to be ensured in accordance with international law.

Obama has reiterated that there would be no precondition for negotiating U.S.?North Korea relations. However, the U.S. administration is likely to pursue a package deal that includes not only the North Korean nuclear program but also human rights issues.


China is involved in the refugee issue. What will happen in the Obama era?

The whole world is watching China. It is in a position to treat human rights issues within its borders more transparently.

Escape from North Korea could have been published around the Beijing Olympics last year to raise the North Korean refugee issue as one aspect of human right issues in China, but the schedule was delayed.

Face-saving is important for China. It may prefer that the United Nations oversee the North Korean refugee issue.


President Carter’s human rights diplomacy was not too popular a policy.

Human rights can emerge as an issue in handling the Palestine-Israel crisis. In the last Bush administration, U.S. moral prestige was harmed. The issue of human rights could be raised as the United States recovers its ethical sanding.


What repercussions will your refugee story have?

For one thing, the readers will take North Korean leader Kim Jong-il more seriously. Kim provides topics for U.S. comedy shows, but American people in general are not familiar with the danger that he embodies. Under Kim’s rule, North Korea has 300,000 political prisoners. 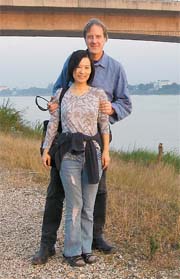 Tom O’Neill and Lee So-young stand on the banks of the Mekong River on the Laotian side. Refugees have to cross the river to reach Thailand, where they can apply for asylum. Provided by Chun Ki-won

Escape from North Korea is not an abstract treatment of a phenomenon. The story is sending vivid images through three living people. Americans are very much interested in stories that involve real people.

National Geographic’s monthly circulation is nearly 10 million copies in 31 languages. Thanks to this story and others, the North Korean refugee issue may come to the fore in the global forum. I will appear in a number of media forums including the National Public Radio program “All Things Considered.”

Could this article have any negative impact?

The history of journalism shows that revealing the truth that is hidden has almost always brought better results. Of course, we have done our best to protect the refugees and Christian missionary organizations. Unfortunately, the reality is that the plight of North Korean refugees cannot but worsen.

In the case of China, it has shown a tendency to “welcome” coverage of its issues by foreign media as a means of monitoring reactions or raising issues.

What was the role of Lee So-young, your wife, for this story?

The story could not have been published without her. She bonded all of us together. She greatly contributed to earning the trust of the three refugees and the people of the missionary organization. At first, the defectors appeared to feel some distance towards me. So-young treated them with food and drinks to make them more at ease.

Will you write another story on Korea?

We are planning to submit a story proposal on wild ginseng. National Geographic photographers and writers are fond of covering Korea because it is an open and vibrant country. National Geographic has had continued interest in Korea. There was an editor who was stationed along the DMZ. The current editor, Chris Jones, has tried several times to get an opportunity to publish a story on North Korea.

Because of the recent rise of China, Americans have become even more interested in China’s neighbors including Korea. Recently, the American media’s fascination with Korean culture, cuisine and movies at times seems to surpass interest in Japan.

Moving beyond the focus on military and strategic issues, the United States and Korea are now sharing common political and economic values.