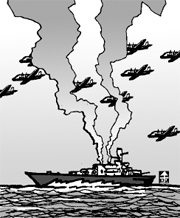 Why did the world’s first atom bomb fall on Hiroshima of all places, killing 200,000 people? It is of course entirely unjust for the innocent civilians who were killed. But for the United States military it was the perfect choice as the city bore high strategic value. Hiroshima was a military city that harbored Japan’s Second Army Group command, the Fifth Division command and dozens of military equipment factories such as Mitsubishi Heavy Industries. Kure’s naval harbor and shipbuilding dock also added to Hiroshima’s military value.

The Japanese have another painful memory related to Kure. The battleship Yamato was completed in the dockyard in Kure in 1941. It was the largest battleship at that time and was equipped with large cannons. The idea was that if its cannon fire is beyond the enemy’s range of gunfire it could easily win a battle and gain control of the oceans. Japan built the 72,800-ton, 314-meter ship with its own technologies. The construction took four years and was kept top secret. After the vessel was completed, the Japanese military was confident that they would never be defeated as long as they had the Yamato. However, once it was sent to battle, the battleship’s performance was quite mediocre as sea battles had already shifted to a war of mobility led by aircraft carriers. The Yamato was a success for engineering but a failure as a strategy.

The Yamato had a miserable demise. In April 1945, the battleship departed from the port in order to deter the U.S. military that was already at Okinawa from landing in one of the main islands. But hit by carpet bombing from 386 U.S. planes, the giant vessel sank helplessly. Among 3,332 soldiers on board, only 276 survived. It was predictable, as there was not a single Japanese fighter plane to protect the Yamato. Just as in most battles of the Japanese army in the late phase of World War II, most of the victims on the Yamato were teenage boys. A document from that time states that the Japanese military command foresaw such terrible consequences but went ahead with a rash departure in order to set an example for the entire Japanese forces of 100,000 to die in honor rather than surrender in humiliation.

Recently news reports are surfacing that people with influence and means in Kure are trying to raise the Yamato that has been lying on the sea floor near Kyushu. There is nothing wrong with restoring history, whether it is to console souls that have been wandering under the sea for 60 years or to use it for tourism.

Nevertheless, we feel uncomfortable hearing the news because we have seen many cases where relics from the war were used to glorify Japan’s aggressive invasions in history and to promote blind patriotism among the Japanese, instead of learning a lesson not to repeat the insanity.

If one doesn’t avoid mistakes of the past, memories that are buried deep somewhere inside the brain tend to surface again.