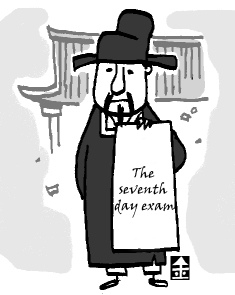 Gao was 10 years older than Du, but the two were nevertheless very close. They traveled together while young and maintained their friendship through letters.

Gao, in government office, was a loyal patron to Du who led an unsettled life in Sichuan amid famine and war.

On one occasion, Gao sent Du a letter which said, “On this year’s renri [humankind’s day], I idle on memories, on next year’s renri, where would he be.”

After Gao passed away, Du Fu re-read the poem and poured out his longing for his deceased friend with the celebrated poem, “To My Old Friend On the Seventh Day of the New Year.”

The story of the friendship between the two men of letters persisted and people in Sichuan still observe the custom of visiting Du’s cottage on the seventh day of the New Year.

Renri, according to ancient Chinese customs, is literally the birthday of human beings, falling on the seventh day of the first month on the lunar calendar.

According to Chinese myth, a goddess created six animals on the first six days and humans on the seventh. The day’s legacy dates back to the Han Dynasty.

Ancient Chinese avoided killing animals during the first seven days and celebrated mankind’s birthday with soups and dishes made from seven different vegetables.

Japan calls this day Jinjitsu and refrains from executing prisoners on this particular day out of respect for human life. Japanese also eat soup with seven vegetables.

The day had been a special day in ancient Korea as well as a day for all, from kings to peasants. Kings would hand out silver hair accessories or allowances to their subordinates. In some provinces, peasants were free to rest on this day.

In South Gyeongsang Province, an eighth day was declared to celebrate the grains or nature following Humans’ Day.

In the Joseon Dynasty, a special exam took place on the seventh day in hopes to discover invaluable new talents.

The day became more than a day of feasting, but celebrated to value human talent and life.

This year, the seventh day fell on Sunday and went largely unnoticed in Northeast Asia as a whole.

The media and netizens are on a frenzied quest about his other crimes nearly every day.

Kang’s evil crimes are execrable, but we would have to ask ourselves whether our society isn’t the source of the problem, with its growing disregard for human lives.