Watch out for doomed lovers, sugary ballads and serenading pianists

Watch out for doomed lovers, sugary ballads and serenading pianists 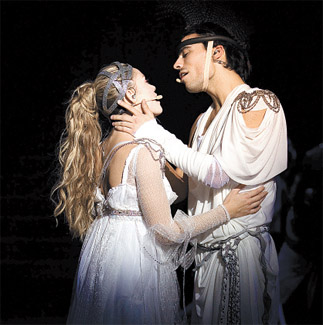 Star-crossed lovers can catch a French production of “Romeo et Juliette” at the Sejong Center for the Performing Arts through Feb. 27. Provided by the organizer

Take doomed lovebirds, for example, who, forever faced with apparent adversity, die tragically young but still clinging to each other.

It seems people just can’t get enough of these weepy tales, and Valentine’s Day is the perfect occasion to wallow in classics like “Romeo and Juliet,” possibly the most famous love story ever written, read or performed.

“Romeo et Juliette,” a musical based on William Shakespeare’s famous tale of star-crossed lovers that premiered in Paris in 2001 will be staged in Seoul for local couples who will, all being well, enjoy a better fate than Romeo and Juliet.

This will be the show’s second time here, following a 2007 run that earned favorable notices in the press.

Recognized as one of France’s most successful musicals today, the show has won several honors in France and other parts of Europe for its chanson-style score.

For the Korea performance, four songs were given a new arrangement, including “Avoir 20 ans,” organizers said.

The all-French cast will sing in French, adding to the romantic atmosphere - if you believe French is indeed the language of love. The show runs through Feb. 27 at the Sejong Center for Performing Arts (02-399-1114~6).

As one famous scene from Shakespeare’s original drama indicates, serenading someone you yearn for under the moonlit sky is another ingredient for spicing up St. Valentine’s season. If you feel like bursting into song in the presence of a loved one, or at least feel like listening to some appropriately romantic tunes, pianists No Young-sim, Isao Sasaki, Park Jong-hun, plus crossover tenor Im Tae-kyung, will be performing at Seoul Arts Center (02-522-9933) in southern Seoul on Feb. 14.

The three pianists are known for their distinct musical styles. No is known for her classical and pop background, Sasaki for his new age style and Park for his crossover pedigree. Organizers promise the spirit of love will break the barriers between musical genres.

In addition, Seoul Pops Orchestra will hold the “Lovely Pops Concert” on Feb. 15, also at the Seoul Arts Center, featuring balladeer Jo Gwan-wu, soprano Go Hye-wuk and tenor Kim Cheol-ho. Romance is in the air, with romantic songs such as “Memory” from the musical “Cats,” “Tonight” from “West Side Story” and the classic tearjerker “Time to Say Goodbye” (02-593-8760).

On the pop front, ballads are surely on strong this season. The quartet Sweet Sorrow will hold a concert on Feb. 13 and 14 called “What a Sweet Day” at the Welch-Ryang Auditorium at Ewha Womans University in central Seoul, while star balladeer Lee Seung-cheol will perform at the KBS Hall in the port city of Busan on Valentine’s Day.