The allure of bad boys

The allure of bad boys 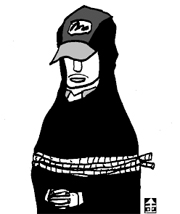 In 1980, the notorious American serial killer Ted Bundy, who confessed to 36 murders, proposed to former co-worker Carole Ann Boone while she was being questioned as a character witness during one of his trials.

She said yes. The pair got married and had a daughter.

Handsome, attractive and an eloquent law graduate, Bundy enjoyed celebrity status in the media and received volumes of fan mail while in prison. He was rumored to have struck up a romantic affair with his lawyer around the time of his execution in 1989.

Without exception, good-looking killers have had female fans.

British journalist Sandy Fawkes met a handsome young man in a bar in Atlanta in 1974. “His good looks made him stand out from the crowd,” she recalls later in her book on her brief affair with him, “Killing Time.”

That man turned out to be Paul John Knowles, known as the Casanova killer, tied to 18 deaths. Fawkes spent that night with Knowles and two more days on the road, charmed by his chilling, strange disposition.

Knowles, too, received numerous fan letters from women starstruck by his good looks and lack of remorse. One even agreed to marry him after an exchange of letters.

What makes these men of good looks and heinous deeds so popular? Criminologists refer to attraction to people who have committed gruesome crimes as hybristophilia, or in more popular terms, “Bonnie and Clyde” syndrome.

Women who are drawn to charming criminals believe that they can reform or redeem these men, cleansing them with their pure love even if they are convicted brutal murderers.

Some are said to be sexually aroused by accounts of their crimes or more simply infatuated by dangerous psychopaths. Some may feel sympathy for criminals behind bars. And for some lonely hearts, these handsome, out-of-reach prisoners live up to their fantasies.

Many were shocked to discover that suspected serial killer Kang Ho-sun was a good-looking man. He confessed to having used his charm to lure female victims and a frenzied interest over him on the Web has even led to an online community specifically celebrating his outrageous deeds.

Some critics say Korean TV programs, with their obsession for handsome rogues, fan such unnatural idolization and the notion that good looks can pardon anything.

Anecdotal records nevertheless show sexy bad boys have long been a hit with ladies around the globe.


The writer is an entertainment news editor with JES.