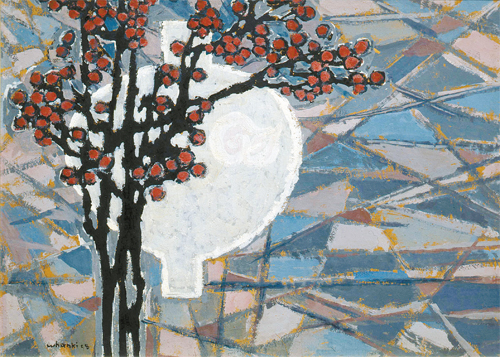 It’s no surprise the art world is suffering a downturn - it would be a surprise if it wasn’t, given the state of the world economy.

But it seems some artists are actually benefiting from the economic hardships.

A string of local art museums and galleries are presenting low-key, reflective exhibitions of artwork from the country’s modern era, a stark contrast to the first half of last year when exhibition halls and galleries, especially recently opened commercial ones in southern Seoul, rushed to hold high-profile exhibitions of works by foreign painters.

These exhibitions are part of a series of survival plans that the industry has devised to weather the storm, one that has seen sales dry up at auction houses. For instance, auctioneers saw a 30 percent drop in sales last December, prompting the art world to come up with a strategy.

According to a report by Seo Jin-su, an economics professor at Kangnam University and director at an art market research institute, total sales at art auctions decreased 38 percent last year from 2007.

Part of this plan is to highlight aspects of modern Korean art that have been largely unappreciated and underrated, and bring into the limelight artists who, more often than not, have been neglected in favor of bigger name stars.

In the past, the Korean art world has allowed itself to be dazzled by the famous at the expense of homegrown talent.

“The history of Korean art pretty much skips over the early modern period when Japan ruled Korea as a colonial power,” said Choi Byeong-sik, an art professor at Kyung Hee University.

During this colonial period (1910-1945), traditional painting and calligraphy declined in the face of an unprecedented influx of Western culture and philosophies, according to Choi.

In fact, some critics insist that much of the art from this early part of the 20th century is a bad sequel to traditional Korean and Western painting, and accuse the artists of being mere copycats. 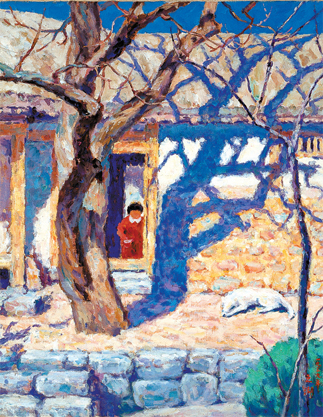 “A House Facing South,” a 1939 painting by Oh Ji-ho (1905-1982) displayed at an ongoing exhibition at the National Museum of Contemporary Art in Deoksu Palace.

Choi says this attitude has prompted Korean art museums and galleries during much of the 20th century to favor European masters like van Gogh or contemporary artists like Paik Nam-june.

According to Choi, this is why Korean art from the early part of the last century tends to be undervalued and sold at prices lower than they actually deserve.

However, fresh interest in this period of history is introducing more people to art that was once neglected.

For instance, an exhibition of local artists is set to break records for numbers of visitors. More than 120,000 people have seen the “Modern Korea Rediscovered” exhibition at the National Museum of Contemporary Art in Deoksu Palace, central Seoul, since it opened on Dec. 23 last year.

In comparison, the “Masters of Latin American Art of the 20th Century” at the same museum last summer attracted 150,000 visitors in three months, while “Great Habsburg Collectors: Masterpieces From the Kunsthistorisches Museum, Vienna,” another major exhibition at the museum, held in the summer of 2007, brought in 230,000 visitors over a three-month run.

The new exhibition, which displays 232 paintings by 105 20th-century local artists and runs through March 22, could well break these records, according to Baek Hae-yeol with the PR division of the museum.

“We believe this is the first-ever large-scale exhibition solely on Korean art of the period,” said Baek, impressed at the excitement the exhibition has generated.

Meanwhile, the Seoul Calligraphy Art Museum in southern Seoul has seen an unusual surge of daily visitors. The secret, organizers say, is the just-finished exhibition, “200 Years of Sochi Heo Ryeon,” that ran from Dec. 2 to Feb. 1. According to the organizers, about 180 people per day have visited the museum, more than twice the usual head count.

Heo Ryeon (1808-1892), whose pen name was Sochi, is considered one of the greatest calligraphers of the late Joseon period (1392-1910). Born in Jindo, South Jeolla, Heo Ryeon studied under Kim Jeong-hee (1786-1856), also noted as one of the greats. The current exhibition displays 70 of Heo’s works, plus some 40 pieces of his descendents, who also pursued calligraphy.

The National Museum of Korea in Yongsan District has branched out with an exhibition on a rare subject for Korea: Western-style paintings by Japanese artists in the 1930s.

“Many visitors say they find it very interesting how similar modern Japanese paintings are to Korean ones from the early and mid 20th century,” Lee said.

And it’s not just public galleries and museums that are promoting art from the early to mid 29th century. Commercial galleries are also getting involved.

“Hills and Water,” a painting by Ji Un-yeong (1852-1935) displayed at a recent exhibition at Hakgojae Gallery. [JoongAng Ilbo]

Hakgojae Gallery in Jongno, central Seoul, recently held “Korean Modern Paintings and Calligraphies,” showcasing some 120 works by 37 artists whose careers spanned 1880 to 1940. None of the art was for sale and the artists were pretty much unknowns from the colonial period.

Meanwhile, Gallery Hyundai Gangnam is hosting “Artists and Moon Jars” showing moon jar-inspired works by Western-style painters from Korea such as To Sang-bong (1902-1977) and Kim Whan-ki (1913-1974). The show runs until next Tuesday.

“Before, the art world focused mostly on either Joseon paintings or contemporary works. Thus, works from the modern times have remained untapped territory for years,” said Lee Tae-ho, an art history professor at Myongji University.

So, is this the time to buy? Although times are tough, a recent report suggests purchasing artworks could be more lucrative than investing in stocks. Korea Art Value Institute said auction houses had seen bid prices rise fivefold in less than a decade, whereas the value of the Kospi doubled during the same period.

Experts advise collectors to research thoroughly before any purchase by checking the history of the auction house as well as the story behind the painting or artwork that has caught your eye.

But Choi Jeong-pyo, the institute’s director and economics professor at Konkuk University, also notes that the type of artwork should be a major consideration before you reach for your credit card.

Based on the institute’s research for the past decade, drawings tripled in value, while watercolors doubled. Prints, like woodcuts, etchings, or lithographs, rose by a factor of 1.7.

They say beauty is in the eye of the beholder, but, with luck and knowledge, it might also add to your bank balance.