On board, gender equality still up in the air

On board, gender equality still up in the air 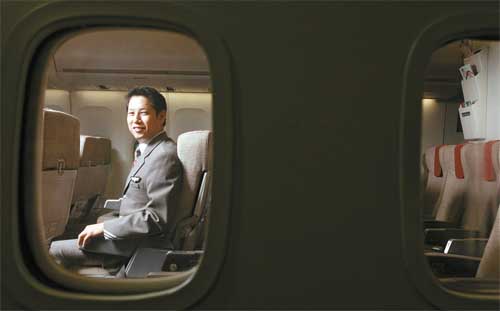 
Korea is home to some of the world’s best airlines, with both Asiana Airlines and Korean Air receiving numerous industry awards.

But not everyone is happy.

“Korean Air is the only airline that restricts employment of male flight attendants this way among airlines that recruit Korean flight attendants, both foreign and local,” said the commission’s investigator, Na Sang-won. 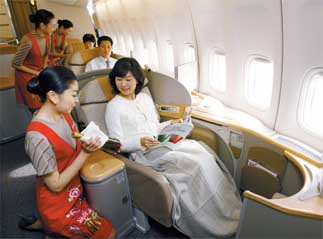 Only 6 percent of flight attendants at Asiana Airlines are male. [JoongAng Ilbo]

But Korean Air said it cannot accept the commission’s recommendation.

It stated that the company deems the process a suitable, efficient employment system to strengthen its service and competitiveness.

The company added that the number of female applicants greatly exceeds male counterparts, and that women tend to possess more qualities deemed crucial for onboard service, like friendliness and attention to detail.

And some might argue that the airline must be doing something right.

Korean Air was selected as the Best Airline in Asia last December for the second consecutive year and Best Business Class to Asia/Trans-Pacific for the third straight year by Business Traveler, a U.S. magazine. 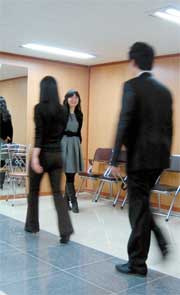 A manners class at a training institute for flight attendant hopefuls. By Kim Hyung-eun

Image of the flight attendant

At a recent training class, she demonstrated the importance of appearance and service. “Everyone, take out your mirrors,” she said.

The four aspiring flight attendants - two men and two women - start stretching their face muscles, puffing out their cheeks and tapping on them. Then together they read out the onomatopoeic words on the whiteboard - ha ha, hi hi, ho ho, he he, hu hu - making sure they maintained the best possible smile at all times.

After the smiling, Lee, who worked as a flight attendant with Korean Air from 1996 to 1998, moves on to bowing and posture at the class, part of the curriculum.

“Korean airlines, in particular, stress the importance of image, as their in-flight services have been geared toward giving the best treatment possible to their passengers,” Lee said. 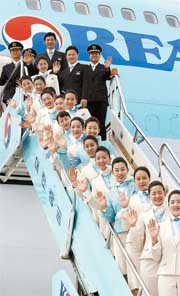 Flight attendants at Korean Air, predominantly women, show off their new uniforms in 2005.

“Many Koreans tend to think that flight attendants are just simple service industry jobs, but in fact they are highly trained professionals,” said one flight attendant with a major Korean airline who declined to be named.

“They are not there to serve, but to help in case of emergency, but Korean airlines tend to put the focus on service, which is why they hire more women.”

“As the industry has long been dominated by women, many of the policies are women-friendly, including uniform designs, resting areas and welfare systems,” said Kim who joined Asiana in 1993 and has logged 12,000 hours in the skies, long enough to circumnavigate the Earth 300 times.

When Kim first joined Asiana, he was among 10 men and 47 female newcomers. Today, only six of the men and two of the women remain.

But Kim says with the airliners’ continued efforts to become women-friendly, coupled with women’s heightened social status, an increasing number of women are staying in the job longer.

“Before the mid-1990s, female flight attendants stayed in the job for two to three years on average. Now they stay for seven to eight years,” said Kim, now a senior purser.

“Over the years, the company has introduced many opportunities in which women can explore their potential through company-supported programs like an MBA program in International Hotel and Restaurant Management.”

The women-friendly atmosphere of airline companies has been noted for some time. Most recently, Korea’s Ministry of Gender Equality signed an agreement with Korean Air to promote a countrywide women-friendly corporate culture.

Korean Air’s president and chief operating officer, Lee Jong-hee, said that over the past three years, women accounted for more than 60 percent of the company’s new employees, and added that Korean Air will do all it can to support high-powered career possibilities for women.

But Kim stresses there are times when a male presence is called for. Kim, who still flies about 10 hours a month, says there are still a few old-school (if not chauvinistic) passengers who demand male flight attendants, saying that they will talk only talk to another man.

Kim also mentioned an incident when a sick passenger defecated in his pants and Kim helped him get cleaned up.

“If I were a woman, I think the man would’ve been extremely humiliated,” Kim said.

Other than that, Kim says, male flight attendants also help put heavy luggage in the overhead bins and roll the heavy cart for the in-flight duty free service.

According to Kim Kyeong-soo, since the 9/11 attack in the United States, all Korean airplanes are required to maintain at least one male flight attendant on board to be better prepared in case of emergency.

However, while the presence of a man may promise higher security for some, the recent emergency landing in New York City’s Hudson River proved that women are just as capable in security as men.

Mike Flores, who heads the U.S. Airways wing of the Association of Flight Attendants-CWA, was quoted as saying, “That’s why [they’re] there. [They’re] not there to give you a Coke.”

While the U.S. incident shed light on the fact that more than 90 percent of flight attendants’ training is emergency preparedness and only the rest on food and beverage service and other customer service in the U.S., this isn’t really the case for Korea, industry sources say.

“I think less than half of our training was about emergency preparation. The rest was about service, language and other general knowledge about in-flight equipment and situations,” said one former flight attendant with Korean Air.

Despite the fact that the flight attendant industry is dominated by women, several institutions for flight attendant aspirants like Ava have noticed a surge in the number of male applicants.

Kim Hee-cheol, a manager at Cosea Academy, says the institution saw a 30 percent rise in enrollment in male students in the first half of last year compared to the same period in 2007. Kim Jin-ha with Ivy Stewardess Academy says the number of male students more than tripled in 2008 from the year before.

“A decade ago, few people even knew that the job [of a flight attendant] was open to men,” said Jeong Ji-taek, a manager at Ava with 15 years’ experience training flight attendants.

“But now, men are much more aware, something we notice when we attend job fairs at university campuses and elsewhere.”

Kwon Byeong-hee, 25, one of two male students at the manners class at Ava Air International, worked as a Web designer, but quit after a year because he wanted to be a flight attendant.

“People around me told me that I would make a good flight attendant, as I tend to be friendly, caring and detail-oriented,” Kwon said.

“I believe service-oriented traits like these are the primary qualities of a flight attendant, while other things like awareness and knowledge of safety are also important.”

“I don’t think things like age, height and gender matter that much. As long as they are considerate and dedicated to the job, I think that’s good enough,” said the other male student at the academy, who didn’t want to be named.

Behind men’s increasing interest in the job are the employment opportunities in the aviation industry, which have notably increased in recent years.

Also notable is that Korean airlines have introduced many new routes because of growing interest in travel and its increasing affordability, despite the global economic downturn.

In addition, the United States’ new visa waiver program is expected to lead to more employment chances. The program allows citizens from 35 countries, including Korea, to enter the U.S. visa-free, with airlines eyeing new routes to the U.S. continent.

Na from the National Human Rights Commission believes that given these circumstances, more men will be interested in the job once Korean Air opens the positions to general male applicants.