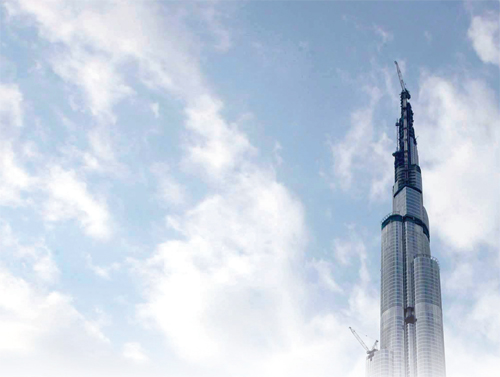 Tall buildings go up as the economy goes down, according to the skyscraper index that came to prominence in 1999 in a report penned by Andrew Lawrence, a former researcher at Deutsche Bank.

Lawrence argued that skyscrapers preceded economic downturns. He cited the Chrysler and Empire State buildings that went up during the Great Depression, in 1929 and 1930, respectively.

And then there’s Chicago’s Sears Tower and New York City’s World Trade Center, both erected in the 1970s when the United States was plagued by stagflation.

Switch to Asia and the financial crisis in 1997 and up pop the Petronas Twin Towers in Kuala Lumpur, Malaysia.

We now find ourselves in desperate economic times, and last year was the biggest year yet for skyscrapers. The average height of the top 10 buildings reached a staggering 319 meters (1,046 feet), and compared to a decade ago, skyscrapers have grown an average of 31 meters in height.

This year, due to the construction of the Burj Dubai Building, which will stand more than 800 meters, the average is expected to rise.

In Korea, though, the story is more complex. In the past decade, there have been frequent announcements for plans to build skyscrapers higher than 100 stories, but none have materialized.

While skyscrapers have sprung up like mushrooms in Dubai and China, Korea has little to show in that area.

“We have the capital, technology and a demand for skyscrapers but we have not moved forward because of regulations and public opposition that few people will really benefit,” said Kim Jong-su, who heads the Korea Super Tall Forum, which comprises academics and people in the building industry who support the construction of tall buildings.

People like Kim are frustrated by the government’s reluctance to push ahead with a tall buildings program. When housing prices were roaring in 2005, homeowners in Apgujeong-dong and Cheongdam, southern Seoul, wanted to renovate their existing apartment complexes to 60 stories, but the government cited dozens of reasons for blocking these plans, such as air traffic safety.

Even if you don’t trust the skyscraper index, the current global economic downturn has yet again ignited discussions in Korea on building skyscrapers.

Currently, the city of Seoul is lifting regulations to make it possible to build skyscrapers along the Han River. 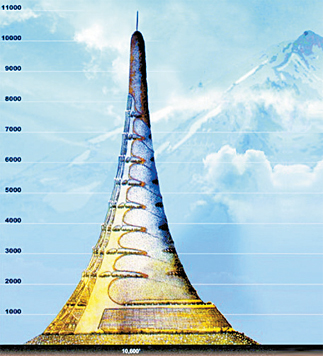 An artist’s impression of American architect Eugene Tsui’s Ultima Tower that, if ever built, would be 3.2 kilometers tall.

The Lee Myung-bak administration sees skyscraper projects as a way to create businesses and jobs.

That’s why we’re going to construction of Busan Lotte World start in March this year; the Landmark Building in Sangam-dong, western Seoul, to start construction early next year; and the World Business Center Busan project to start in June 2010.

All three are very high buildings.

Needless to say, building standards have changed as technology has grown more sophisticated.

In 1890, buildings over 10 stories were considered tall but nowadays the Council on Tall Buildings and Habitat define tall buildings as those 50 stories or taller.

Buildings in Korea that are 50 stories high, or over 200 meters tall, qualify as skyscrapers.

The country’s first skyscraper was the 63 Building in Yeouido, Seoul, that commands a height of 249 meters. Construction started in February 1980 and was completed in May 1985.

At the time of its completion, it was the tallest building in Asia. In the late 1990s, other buildings such as the Tower Palace buildings in Dogok-dong, southern Seoul, that range from 55 to 69 floors replaced the 63 Building as the No. 1 skyscraper in Korea. 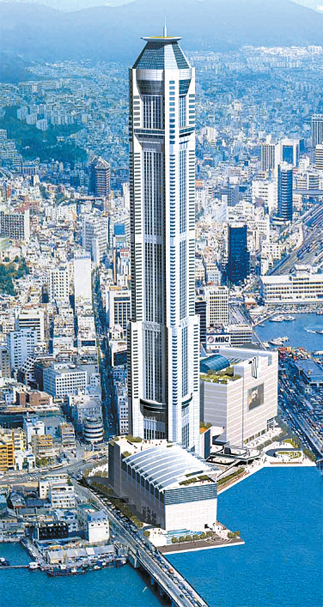 For the Seoul area, the Yongsan Dream Tower and Incheon Tower are mammoth buildings slated for the metropolitan area. Both should be higher than 600 meters when finished.

But aiming for the sky is not cheap. According to experts, a 60-story building is 1.3 to 1.4 times more expensive than building two 30-story buildings because construction costs rise with the ever-increasing height of the building.

From a technical viewpoint, it is possible to go as high as 1 kilometer, but only the super rich could afford the rent.

Yet, despite the high costs involved, companies that engage in such projects argue that skyscrapers have a positive impact on the local economy.

Lotte Group argues that if it spends at least 1.7 trillion won ($1.2 billion) to build a 112-floor second Lotte World in Jamsil, southern Seoul, about 2.5 million people will be employed during the duration of the project on a yearly basis.

Not only that, about 23,000 permanent jobs will be created upon completion of the building, Lotte claims.

These tall buildings are also viewed as tourist attractions, and that means cash and development.

Experts say that a 100-floor building is usually home to 10,000 permanent workers.

Critics of tall buildings argue that they are not healthy places to live.

People living in tall buildings over a prolonged period report feelings of dizziness, but people like Kim Jong-su of the Korea Super Tall Forum dismiss such concerns, saying research from overseas suggests that living in an apartment 80 floors up poses no health problems.

What is undisputed is the risk of fire: It’s much harder to evacuate people from the top floors if a fire breaks out lower down the building.

That is why the city of Seoul has separate rules when it comes to tall buildings. Provided they are not counted in the overall space of the building, construction companies are required to build a special floor for evacuation purposes every 25 to 30 floors.

In addition, builders have to install elevators for the exclusive use of evacuation.

But the National Emergency Management Agency objected, saying that current laws that require heliports for certain buildings be enforced.

Striving to build buildings even higher than existing ones is part of human nature, but tall buildings are also seen by some as the ultimate solution to resolve the Earth’s population problems.

The American architect Eugene Tsui conceived the idea of the Ultima Tower as part of a study of the compact urban area of San Francisco.

The project combines nature with an urban environment on a scale that would blow away all competition. This tower would be 3.2 kilometers high and, if built, would easily be the world’s tallest building, a title it would probably hold for a very long time.