Break out the ballet moves

Break out the ballet moves 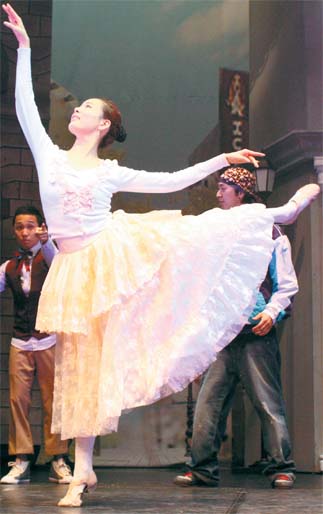 It’s hard to know where to look during “The Ballerina Who Fell in Love with a B-boy,” a nonverbal dance performance currently playing at the Ewha 100th Memorial Hall in Jung District, central Seoul.

There’s so much action, your eyes constantly move from left to right and back again to absorb all that head-spinning and leg-twisting the break dancers - better known as B-boys - are doing.

Though it’s been more than three years since the show first opened in December 2005, directed and produced by Choi Yoon-yeop with his company, Show B-Boy, the stage hasn’t lost any of its dynamism.

Rather, as the years pass, the show seems to be getting even more popular than ever. 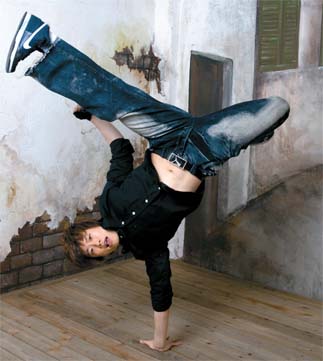 While it was previously staged at a private theater in Hongdae, northern Seoul, the show is now at a theater in Jung District in central Seoul, where there are more tourists and tourist sites.

And the cast - Extreme Crew, a local B-boy group that won the 2007 Battle of the Year; two hip-hop groups, Illusion and Ex Girls; and three ballerinas, including Yoo Eun-hae, the female lead - are on cloud nine.

The performance, which is a mix of street dance and ballet, was taken abroad to Shanghai, the Edinburgh Fringe Festival in Scotland, and recently off-Broadway.

“The show appeals to foreigners in many ways, including the fact that it is a nonverbal performance - but still has a story line - and it is a fusion of two completely different genres of arts [street dance and ballet],” said Choi, the producer.

The inspiration for the show came to him as he realized that “there is no distinction in culture.”

“Many people think of ballet as high-class and difficult but that’s just a stereotype,” he said.

That’s why Yoo, the ballerina, accepted her role in the show as So-yeon, an elegant ballerina who becomes a B-girl after being charmed by street dance.

“Though nonverbal, the show has a story that involves many emotions,” said Joung Young-gwang, a member of Extreme Crew, who plays main character Suk-yoon.

“Dancing has always been part of my life,” he said, at a nearby cafe after the show last Saturday.

“So for me, the difficulty was in acting.”

The show begins with street dancers showcasing their flair. Among them, Suk-yoon is simply the best.

Meanwhile, So-yeon, who is in a ballet rehearsal with two friends, is disturbed by the loud music outside and goes to check out what is happening.

There and then, the ballerinas and the B-boys battle it out with their two different dance styles.

Later on though, So-yeon realizes that she was impressed by Suk-yoon’s performance and secretly practices street dance to become a B-girl.

For Yoo, going from ballerina to B-girl, even if it was in the play, wasn’t easy. “You use different muscles and body parts for ballet and break-dancing,” she said.

While ballet requires balancing on the toes, B-girls need to be able to balance on their arms, according to Yoo.

“It’s a totally different sport,” she says, noting that despite the challenge, she doesn’t have any regrets.

And neither does Choi, the show’s producer.

“The performance fits well as a form of hallyu [Korean wave],” he said.

“But there must be sustainable support from government policies.”

With budget support, he says, he firmly believes that “another leap of hallyu success is yet to come.”

“The Ballerina Who Fell in Love with a B-boy” is on until Feb. 28 at the Ewha 100th Memorial Hall in Jung District, central Seoul.