[TV review]Working up a sweat about TV’s pretty boys

[TV review]Working up a sweat about TV’s pretty boys 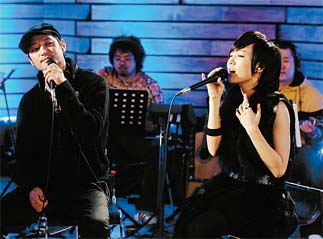 “Voyage to Music” remains faithful to the true spirit of music, which is what Korean TV needs right now. [MBC-TV]

Ladies and gents, I tasted heaven this morning.

Running on a treadmill in sweats sporting the big fat (and far from stylish) logo of my gym, I was on super cloud nine, my eyes fixed to a TV monitor.

Precisely speaking, it was not just one TV monitor. Remaining true to my TV reviewer professionalism, I dominated neighboring TV monitors on both left and right sides, tuning three TV screens to all different channels.

Ahead of me, I had pretty boy actors from the TV Cinderella drama, “Boys Over Flowers” with their A-1 smiles that are cure-alls to my mundane headaches.

And when I was confronted with futile scenes featuring girl characters, I swiftly turned my head to the right and left screens for the featured sports and entertainment shows I’d tuned in to.

I admit now that my interest in the sports channels is not related to the game but to the players. More precisely, to a handful of hot golfers that I’ve noticed in recent weeks.

I know nada about this sport - frankly, I don’t understand the point of hacking away at little white balls on fields of green - but to understand the beauty of these golfers, you don’t need to know a bogie from an eagle.

This is my definition of heaven, folks: a diversity of pretty boys and hot guys on my TV screen.

Who could blame this 30-something single woman?

It doesn’t sound terribly sane, I know, but we all need a little painkiller for our everyday routines. Don’t understand? Well, you are either too blessed or too ignorant.

So, back to this one hot golfer. At work, I badgered the sports reporter at the JoongAng Daily with an array of questions about Sr. Villegas. I got the essential information: He’s single (theoretically).

I also got a link to a gallery of snapshots of the golfing Adonis, all thanks to the hardworking newshound that mans the sports desk, a writer whose stock will rise even further with me if he allows me to tag along should he get hold of the Colombian Cutie for an interview.

So watch out for thinly disguised sports reports in this paper that rave about the glories golf from the esthetic view point of a 30-something TV columnist.

One sad truth, though.

About seven hours have passed since I tasted this TV-created heaven, and, sadly, I am now experiencing a downturn of emotions.

The joy of flipping through online shots of Villegas feels a little irksome. O.K., I confess that I am surfing the Web now to find places to get Spanish lessons (just in case, you know).

But there’s no need to despair, because I have “Voyage to Music - La La La” to watch tonight on MBC-TV, airing Wednesday nights around midnight.

A Korean version of “Live from Abbey Road,” a British and American TV music show, Voyage takes viewers to a feast of music, featuring live performances by one main and one supporting act.

If you are still unfamiliar with the Korean language but curious about local television, this is the right show to try, because it doesn’t take much Korean to appreciate the music that local musicians have to offer.

Voyage features a wide spectrum of musicians, from independent artists like Yi Sung-yol, whose concert tickets sold out after his appearance on this show, to mainstream (yet talented) songstresses like Younha.

It’s a great reason to wait for Wednesday nights, although I find it a little too demanding to wake up the next morning to hit the gym to get a dose of the pretty boys.

With this music show and pretty boys on screen, life is not so bad.

All those things that drive you to despair or leave you feeling exhilarated pass eventually. Remember, we always have this little gizmo called television.