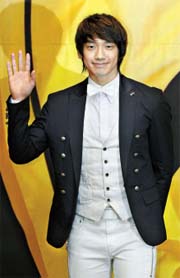 Keep your fingers crossed - hallyu star Rain, 27, will be present at the Hawaii District Court next month in Honolulu.

Click Entertainment, a Korean company that has a branch in Honolulu, filed a suit against Rain and JYP Entertainment, the singer’s former agency, last year. And legal actions are going ahead.

The company filed a $40 million lawsuit after Rain canceled his world tour, which was scheduled to hit Hawaii in June 2007, arguing that there was too little prior notice and 1.1 billion won had already been invested in the show.

“We will put an end to the legal issue over the world tour at the upcoming trial by jury,” noted J-Tune Entertainment to Yonhap.