[Talk of the town]
You snooze, you lose at CGV’s epic movie watching marathon 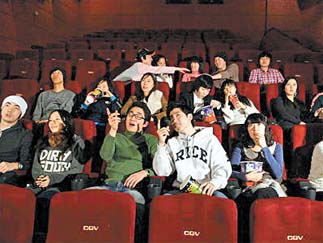 Fancy earning money in your sleep? CGV Theater announced last week its plan to hold the 1st Movie Watching Marathon at its Wangsimni chain in central Seoul, on Feb. 24. The winner, the last to drop off, takes home 3 million won.

The contest starts at noon with 300 participants and continues until all contestants fall asleep. Forty Korean films released last year will be screened.

Surprisingly enough, the world record of the longest movie-watching marathon was set in Norway in 2005 - with 70 hours and 33 minutes.