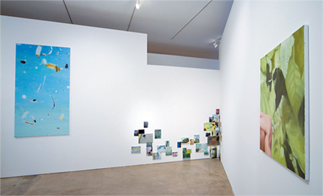 “Sidescape” at Ssamzie Space in Hongdae, western Seoul. Provided by the organizer

Not everyone agrees number seven is lucky, but the artist Hong Soun certainly thinks so.

His artworks were featured at the seventh SITE Santa Fe Biennale in New Mexico, U.S., in June 2008.

“Hong got a lot of very favorable attention and offers of other exhibitions after his work went to SITE Santa Fe,” said Shin Hyun-jin, the curator at Ssamzie Space in Hongdae, western Seoul, where Hong will put on his show from Tuesday.

Established in 1995, Site Santa Fe hosts the only international biennale of contemporary arts in the U.S., according to the organizers of the festival. 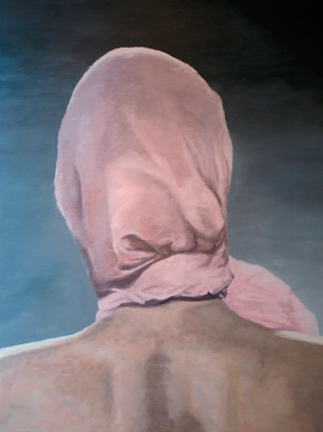 “Barcelona,” by Hong Soun, which features in the exhibition.

Hong’s “Sidescape” installation at Ssamzie Space contains paintings of rocks, mountains and seashores that are made up of familiar images from print media, postcards and advertisements.

Some of these images are taken from the world of fashion, others are more disturbing scenes taken in war-ravaged countries and following terrorist attacks.

Hong then incorporates these images into his oil paintings using subdued hues to reflect the gravity of the themes unfolding in the works.

“We simultaneously experience revulsion and euphoria knowing that these beautifully painted images are simply edited visions of the insidiousness of human nature,” said Shin.

While the images are familiar, the faces in the paintings are not.

According to Shin, the artist’s deliberate loose painting style often leaves the audience questioning the ambiguous pieces and pondering what the whole might be.

Born in 1959 in Seoul, Hong has worked in different media, ranging from printmaking to installation art.

“He is known to focus on the philosophical investigation into the relationship between parts and the whole as well as the themes of the impermanence of beauty and artificiality,” said Shin.