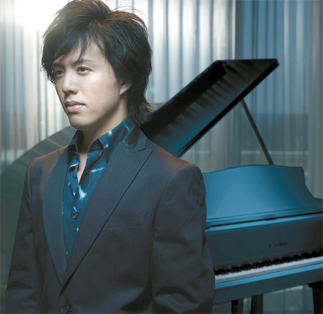 Chinese pianist Yundi Li has two upcoming recitals scheduled this month in Seoul.Provided by the organizer

With his sleek hair, big eyes and a classic gentleman-like aura, Yundi Li looks as though he just popped out from “Boys Over Flowers,” the hit TV series about a modern-day Cinderella tale.

In fact, some call the Chong-qing-born musician the “Prince of the Piano.”

But we shouldn’t judge Li just by his looks.

Although he’s only 26, critics are hailing him as a virtuoso. He’s been wowing the world ever since at the tender age of 18 he won the prestigious 14th International Frederick Chopin Piano Competition in Warsaw in 2000, the youngest winner in the history of the competition, and the first Chinese citizen to do so.

“My musical career took off at the Chopin competition, so people tend to link me and Chopin quite often,” Li said in a recent phone interview.

“His music is indescribably beautiful yet extremely complex, so it feels new every time I play it. I think that’s the biggest attraction,” he said.

The young virtuoso is coming to Korea later this month to give his first solo recital here in six years.

And romantic Chopin pieces like Nocturne Op. 9, No. 2, will be among the highlights of the evening’s program.

Li is often compared to Lang Lang, a star Chinese pianist who played at the opening ceremony of the 2008 Beijing Olympics.

Critics juxtapose the elegance and smoothness of Li’s playing with the flair and funkiness of Lang Lang. On this, Li says it’s rather difficult comparing two artists.

The two also have contrasting backgrounds. Whereas Lang Lang was “destined” to become a pianist under his father’s supervision, Li says he had no parental pressure to pursue music as a career.

“It was totally my choice. When I started to play piano at the age of seven, I didn’t really think of where it would take me. I just like music and the piano and that’s what brought me where I am today,” he said.

“I believe because of their musical career and contribution, today’s musicians like me and future generations can seek performance styles that are different from the past, and even upgraded from before.”