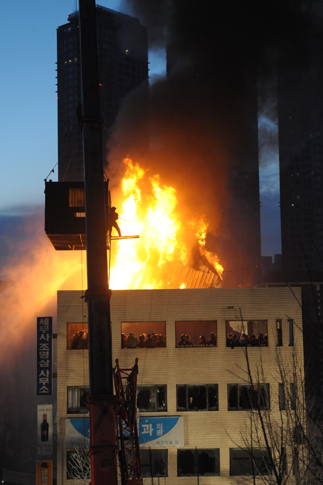 The fundamental problem of the Yongsan incident lies in the fact that concerned parties resorted to violence to solve an economic dispute.[NEWSIS]


There’s a Korean saying that goes, “The fist is closer than the law.” It means violence is more effective for solving disputes than the legal system.

Needless to say, the fist came first in primitive societies that existed before the establishment of modern communities, because there was no law to settle disputes by nonviolent means.

Even if law exists, the situation remains savage if society doesn’t abide by it.

Instead of trusting a law nobody abides by, it’s faster and more effective to settle things with one’s own physical strength.

If there is a blind spot in the law, it’s more likely that violence will prevail in that area.

Shadowy areas of society provide favorable conditions for gangs and swindlers to go about their shady ways. The more places there are where law and order do not reach, the more prevalent violence will become.

And societies that try to solve things with fists do not become advanced nations.

The state of law and order in a society is the barometer of how civilized that society is.

The tragic Yongsan fire vividly revealed the fact that Korea has a long way to go before it becomes an advanced society.

The fundamental problem of the Yongsan incident lies in the fact that the parties involved resorted to violence, instead of the law, to solve an economic dispute.

The clash between the interests of the tenants at Yongsan, who wanted to get more compensation for losing homes and incomes, and developers, who tried to give less, devolved into violence.

The conflict centers on the dispute over whether or not to acknowledge business losses and facility installation fees claimed by tenants who ran small businesses at rented stores. And they are not covered by the law.

The developers claim that the tenants should move out because they have been paid the deposits and transfer fees set by the law.

But the tenants insist that they can’t move out until they get paid the business premiums and installation fees they invested in their stores. The developers prefer to resort to the law, but the tenants claim that they cannot survive with the compensation they get under current law.

As there was no sign that the differences could be resolved by the law, both sides decided to solve the problem by exercising physical strength.

The developers sought the help of a site clearing company, and tenants borrowed strength from an urban solidarity group, the National Alliance of Squatters and Evictees.

Their physical clash increased the level of violence, and in the end, people were tragically killed in the course of police action.

Opposition political parties and some civic organizations, claiming that the police used excessive force to suppress the protesters, started to instigate anti-government rallies. It is, however, nothing but an attempt to gloss over the fundamental problem of the incident.

The poor protest crowd-control skills of the police should be improved so that we can avoid sacrificing lives, but this does not necessarily justify violence.

After all, the absence of police intervention does not make the conflicts and the clashes surrounding redevelopment projects disappear.

The only solution is to bring these conflicts, which expose a blind spot in the law, into legal bounds.

The Yongsan tenants probably had not resolved to protest violently, or to risk sacrificing their lives. They merely chose to protest in order to claim their rights that were not protected by the law.

The belief that violent means were effective in solving problems at urban redevelopment sites in the past was probably behind the decision to take things to the next level. Thus, the tenants pursued economic rationality outside of the law.

However, this belief has been proven wrong. Once the violence starts, it becomes difficult to control what happens. Violence only leads to more violence.

Some would quote Albert Camus - “I would rather choose disorder over social injustice” - to justify or even encourage violence by the socially weak.

However, there is no winner in a barbaric battle of violence. There is only a victim and a loser.

At a cabinet meeting on Tuesday, the government decided to give store tenants the right to buy stores in new commercial developments, to raise compensation for businesses suspended in development projects, and to establish a dispute control committee to mediate conflicts overs such projects. The rights of tenants in redevelopment areas, which have been neglected by the law in the past, are finally protected by the legal system.

If these changes had been made earlier, the Yongsan tragedy would never have taken place.

The tenants probably would not have made the extreme choice of staging an illegal protest at the building site. Mobilizing public power to suppress protesters after a violent incident takes place is also a part of the rule of law.

However, isn’t it the true nature of the rule of law that we take care of the rights of the weak, who have no legal protection, in advance, so that they do not have to turn to violence at all?