Forget the cake, buy a diamond

Forget the cake, buy a diamond 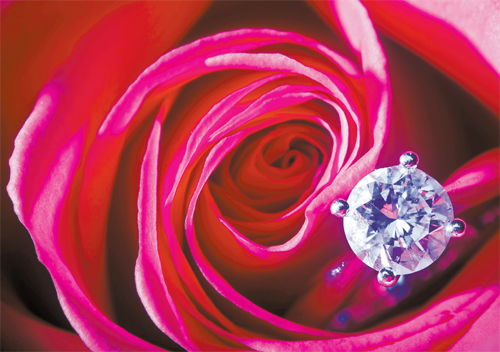 Are diamonds really a girl’s best friend? Our survey suggests this is the case, something guys should remember if they are planning to propose. By Kwon Hyouk-jae


A Seoul-based office worker Kim Seong-yoon wants to tie the knot with his girlfriend this spring. And he is driving himself crazy every day trying to come up with a way to pop the question.

Kim said he actually regrets having given her surprise gifts and flowers during their relationship, since he’d have to top the surprise scale when he proposes to her. How should he present the ring? Should he scream, “Will you marry me?” in the middle of downtown Seoul?

Kim is stumped, and he isn’t alone. If you want to walk down the aisle by May, a popular month for Koreans to wed, you’d better propose this month, according to Seoul hoteliers and restaurateurs who have seen their share of proposals. And remember, Valentine’s Day is just around the corner.

But the question is, how?

A graduate student, who only revealed his family name Kim, rented a hotel room, filled it with balloons and prepared a bottle of champagne for his girlfriend. He’d planned to present the ring and pop the question.

But the reaction of the woman in question was tepid. Kim’s postmortem? His girlfriend found out Kim had copied the same proposal plan that a colleague of his has tried.

Another office worker, who wanted to be identified only as Jeong, recently planned to propose at a restaurant. He told his fiancee that he was going to the men’s room, took the stage at the restaurant, and read aloud from his love letter to the gawping patrons.

To cap it off, Jeong shouted out the girl’s name. But he was crushed. The woman’s embarrassed look said, “Why are you doing this in front of all these strangers?”

You see, proposals that work so perfectly in movies don’t necessarily lead to happy endings in real life. The JoongAng Ilbo went to work and tried to find out why.

With the help of the matchmaking service firm Duo, we surveyed 89 men and 107 women about their ideas for the perfect wedding proposal. The results revealed a staggering chasm between what men thought were decent proposals and what women thought indecent.

Forty-six women picked spots in the countryside outside Seoul as the place they’d like to be proposed to. But only four men said they’d pop the question there.

For men, hiding the ring in a cake or food ranked as the most ideal proposal, with 35 respondents, followed by 29 who said they want to get down on their knee in public.

In contrast, 21 women, the second largest number, said they would hate to see the ring planted inside a cake. The third most respondents, 11, said they can’t stand the embarrassment of having strangers watch them in public.

Also, 11 men in the survey said singing was the best proposal gift. None of the women agreed.

Women sent another warning to guys: Don’t skimp on proposal events. Thirty-four women said they don’t want to feel as though their men tried to keep costs to a minimum.

Take our first anonymous woman, a 30-year-old office worker called Kim. On Valentine’s Day last year, her boyfriend of one year told her he wanted to take her somewhere special. She had been considering marrying him and Kim sensed he was about to pop the question.

But, alas, her expectations only bred disappointment. Kim was led to a cheap motel, where girls who looked to be at least 10 years younger than she were hanging out in the lobby. She broke up with him right away. The man had prepared flowers and wine inside a room, but Kim was convinced this was no occasion to skimp on the finances.

Speaking of money, we have one more message for men. Diamonds are indeed a girl’s best friend. In our survey, 61 women said they would like a diamond ring as part of the proposal package, compared to just 19 men who said they thought a diamond ring was appropriate.

Finally, we asked one man who has helped set up more than 330 couples.

Kim Hak-soo is the restaurant manager at the Shilla Hotel in Seoul. Over the past three years, Kim has worked at Top Cloud, a restaurant operated on the 33rd floor of the Jongno Tower in Seoul, and at the hotel itself in central Seoul. He first applied his magic touch in 2006 at Top Cloud, a popular dating spot in the city, organizing open proposal events. Kim took reservations, set the table and menu, and advised on what to prepare for the big day.

The first on Kim’s to-do list is to go the extra mile. Get your roses and wine ready, and the menu should all but scream this is indeed the special occasion. And when the moment comes? Get down on your knee. Literally.

“Guys generally think the ladies will feel too embarrassed, but I guarantee they will cry if their man gets down on bended knee,” said Kim, stressing the importance of saying “I love you” and “Will you marry me?” but adding that such phrases are predictable so guys should be prepared to speak “from the heart.”

That’s easier said than done. But below, we provide a guide on romantic places where the ambience will help you get into the right frame of mind. 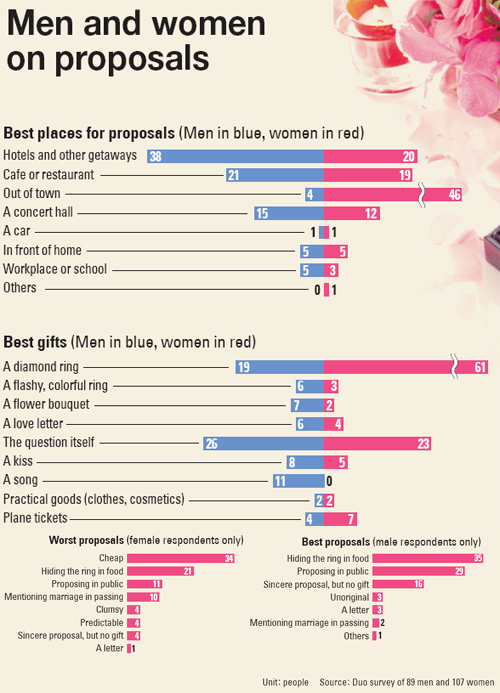