A taste for fine wine, food and writing

A taste for fine wine, food and writing 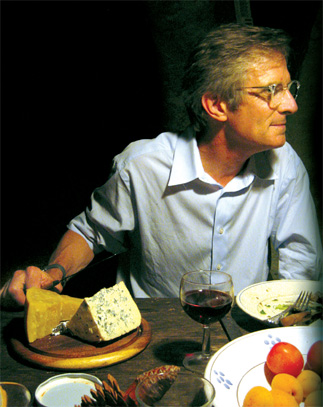 American food writer Edward Behr, 58, is tireless when it comes to tasting and studying ingredients.

As founder, publisher and editor of “The Art of Eating,” a quarterly food magazine that first appeared as a food newsletter in 1986, Behr is also the author of “The Artful Eater,” which addresses “the raw materials of good food - from salt and pepper to salmon, ham, mustard, beef, apples, vanilla, cream and coffee,” as he states.

Given the fact that Behr is a renowned culinary writer with faithful readers and subscribers, it’s hard to imagine that his magazine, which has a circulation of 6,000, has no advertising. Pages are instead filled with in-depth articles, recipes, letters, a wine review (“Why This Bottle, Really?”), restaurant and book reviews, and profiles of bakers, cheesemakers, vintners, chocolatiers and restaurateurs.

But how can a magazine manage to turn a profit without advertisements?

“The magazine [The Art of Eating] is profitable, partly because our costs are relatively low and partly because we sell books and many back issues, including complete collections.

“I make enough money to live reasonably well in rural Vermont. If I lived in Manhattan, it’s true that I would have to have a much larger income. And we are always considering ways to expand readership, although with only moderate success,” he told the JoongAng Ilbo by e-mail.


Could you elaborate on how you manage a magazine without any advertisements?

I don’t believe advertising would increase profits. Instead, [with advertisements] the business would be much more complicated to run and the entire economic logic would [have to] change.

First, the special relationship of trust with the reader would be replaced by a more conventional one. We would have to lower our subscription rates to put us in line with our competitors, and we might even lose readers once we lost our unique niche.

And I suspect we would lose so many readers that the business would fail.

What is the economic definition of a tiny magazine with advertising that aims for the highest quality? I’m not sure there is one. The best magazines with ads also have the highest quality ads - those with the highest production values. An essential part of the experience of reading The New Yorker or Vogue, to use two U.S. examples, is turning the pages and seeing the visual interplay between advertising and editorial.

The problem with a food magazine is that there are few if any food or wine advertisers with that level of visual quality. There are big corporate “lifestyle” advertisers, yes, but they aren’t looking for niche audiences.


Have you had any financial problems?

In fact, especially in the first years, we have periodically wondered whether it was wise to continue [without advertisements]. 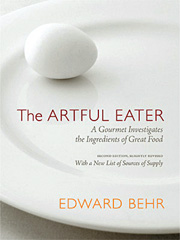 In addition to penning “The Artful Eater,”

At first we would say: “Let’s do just one more.” We said that issue after issue until finally we forgot to say it and we just continued to publish. But we did begin to make money after a few issues, and there has never been an actual crisis.

Now I feel confident about the future, even in the present difficult economic environment. Popular interest in food, from a more or less “slow food” point of view, continues to increase in the United States and a number of other countries, and I expect that to continue for a very long time. 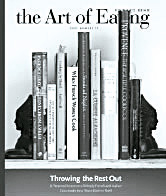 Can you tell us more about your business and the publishing team? How many people do you work with?

Most people assume that “The Art of Eating” is produced by a team. And that’s true. Each issue is the result of strong collaboration. Yet all the writers, photographers, artists, editors are freelance and live all over the United States or abroad.

One could, I suppose, have a very political discussion about that. I have a managing editor, two copy editors and one graphic designer. Each issue contains the work of 10 or 12 writers and perhaps eight or nine photographers and artists.

I talk on the phone with Winnie Yang, managing editor, every day and exchange countless e-mails. We also have many kind advisers for particular subjects.

That said, publishing a food magazine is a very 1960s sort of business, in that it lies so far outside the mainstream and is not driven by profit margins.

I’ve sometimes been less concerned about profit than I should be in order to make the magazine financially secure and as good as it can be.


What’s your philosophy on good writing?

For The Art of Eating, I push hard to make the writing, by myself and others, very clear, which usually means fairly simple: short sentences and short words, and everything carefully ordered so readers can easily understand.

Simple in this case doesn’t mean “plain,” it means refined as much as possible, which I might argue is the truest meaning of simplicity. The model, for me, is poetry. Of course, simplicity is often one of the hardest things to achieve, and not every subject and writer is ideal for that approach.


And what’s your philosophy on good food?

I used to say that in my writing I try to answer the double question. What is good food and what makes it good? Of course, good food can be many different things, from a grilled fish seasoned only with salt and eaten outdoors beside a fire on which it was cooked to the most delicate dessert made with beaten egg whites. The answers are endless.


In your writing, you focus a lot on taste. Why do you think taste matters so much?

To me and almost anyone, taste is by far the most interesting aspect of food. As one of the senses, it is an essential part of being human, one of the most important sources of pleasure, and it can be a highly enjoyable guide to understanding the world.

By the last, I mean nature. The way something tastes, lettuce, a peach, a fish, port, can reveal a story about weather, season, climate, soil or water, the farmer or gardener, much more.


To have refined taste, what kind of effort is needed?

You need a lot of really outstanding raw materials and to care deeply. Only after that, perhaps, comes an innate gift. I’m not forgetting that technical knowledge of cooking is required.


Moving on, what’s your opinion on printed press and online?

The advantage of print is that it is much more efficient for the reader than any online publishing I’ve seen. And physically, a book or magazine can have enormous appeal. Not only is there crisp detail and in that way more visual information, the paper itself can provide a tactile pleasure than is impossible with a screen.


What’s your opinion on online recipes?

The quality of recipes on the Internet is mostly bad, at least in English, and the average person cannot tell that until it is too late.

Online recipes are frequently borrowed without credit, the same recipe appearing sometimes on multiple sites, and placed there for reasons other than helping people to cook. The sharing ought to be good, but what is being shared? Mostly, from what I’ve seen, there is a mixing of different shades of mediocrity with only a small amount of high-quality information, and no way for most people to tell the difference.


Following your book, The Artful Eater, do you have any plans of writing other books about food?

I am writing, very slowly, a book about bread and a book about a number of foods, a kind of handbook. I don’t have time to write more quickly.


What books have you read recently and what was the most influential book in your life?

Richard Olney’s “Simple French Food.” Next is Patience Gray’s “Honey from a Weed.” The styles are extremely different, but the writing in each case is superb.

I have the bad habit of reading more than one book at a time.