A look into the future and what it holds

A look into the future and what it holds 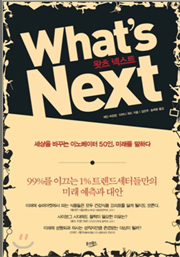 What’s Next: The Experts’ Guide

The world changes. And in life, there are people who go with the flow and others who persist in fighting against the current.

This book is especially for those who never want to be left behind.

Jane Buckingham, the founder and president of the Intelligence Group, a trend forecasting firm, spoke to 50 different people in a wide range of industries, some experts in their own fields and others just with unique points of view.

Rather than simply asking them for predictions, Buckingham quizzed them on their hopes for the future and what they thought should never happen. This approach was based on the belief that each individual’s inspirational perspective on the future would be much more valuable than wild predictions.

On the political front, Joe Trippi, a campaign advisor known as the “person who re-created the election campaign” forecast that television will soon disappear from American political culture.

In the past, how much airtime candidates got was a crucial factor in who eventually got elected.

Yet this kind of campaigning might not exist in the future, Trippi thinks, because the areas covered by television have been invaded by the Internet, social networking sites and new media. As two-way, interactive media evolves and becomes more sophisticated, it will inevitably take over television’s role.

Also, changes in traditional leadership styles to ones that stress charisma may come about. Marcus Buckingham, the author’s husband, opines that a new type of leadership - equipped with transparency, strong morality and open-mindedness to understand the Y-generation - will be on-trend pretty soon.

In the social sphere, Nancy Schulman, a nursery school director and education expert, sees a rise in the relevance of preschools, which will provide a more diverse range of subjects, from foreign languages to sports and basic life skills.

However, the author leaves some basic questions unanswered, such as “Will the future be like the past?” and “Is there any value in talking about the future?”

Jane Buckingham is said to have provided data on future lifestyle changes to Microsoft, MTV, ESPN, Sony and L’Oreal. How helpful her research is to your life is for you to decide.


What’s Next: The Experts’ Guide