Stories, poems about Korea that leave you wishing for more

Stories, poems about Korea that leave you wishing for more 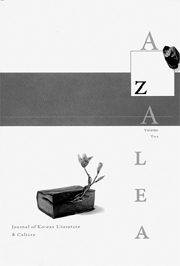 The least you can expect from “Azalea, a Journal of Korean Literature and Culture,” is a good read.

Short stories, poems, excerpts from novels, photographs, illustrations and even comic strips from both South and North Korea are well translated and of consistent quality. The editors at Harvard University’s Korea Institute offer their own insights from time to time and their investment in Korea is obvious. It comes across in the seriousness with which they approach their work.

The selections written about North Korea from the outside and from North Korean writers themselves have the allure of all things North Korean - they provide a glimpse into what life is like in one of the more closed societies in modern times.

Stories written by former North Koreans strike a critical tone, while those penned by the country’s current citizens emphasize the role of the state and the lengths to which people will go to see that the state prospers.

One of the best examples of the latter is “Make the Ocean Blue,” by Choe Ryon. It tells the story of a young ocean activist who wants to stop the harvest of seaweed off the coast where her father earned a living as a fisherman during her childhood.

A researcher for the state has found a way to process the seaweed into chemicals used to mine rare minerals. The minerals are “vital to national defense,” but the activist argues the ocean’s ecosystem is at risk.

The official to whom she appeals admires her determination and while he stands behind the project, he develops feelings for her personally. Their love story becomes a subtext of the story.

The activist decides to appeal to the researcher directly and herein lies the depth of her loyalty to the state. Separated from her son and husband for extended periods to conduct her research, the scientist listens to the activist’s pleas and decides she cannot in good conscience leave the ocean unusable for future generations.

She scraps her plans after a few days of hard thought and decides to subject herself to another long period of intense research to find a different way to produce the chemical.

Her husband and son visit her, nearly tearing her heart in two, but she persists, and her husband tells their little boy that his mommy will be giving him the ocean for his birthday. The boy accepts their separation as inevitable.

As her train pulls away, the researcher and the activist, who has decided to join her, see the husband and son playing on the beach. Tears stream down the researcher’s face, and the activist, Hae-song, “felt herself crying, too. She [Hae-song] shouted inwardly. The valleys and gorges that this simple and vulnerable woman [the researcher] must still traverse are deep. But with a loving husband and son standing at the summit how can she give up mid-way? No. This isn’t darkness and suffering, it’s light and passion and joy.”

Not all of the literature from inside the North deals with matters of state. “Oh, My Mother,” a poem by O Yong-jae, was written upon hearing after 40 years that his mother was alive in South Korea, and shows that South Koreans are not the only ones wounded by a divided Korea.

“This son wails. On my knees, my senses … gone, I bow over and over again,” O writes in the poem. “What has kept Mother going till today, is not the grace of God, nor Time’s sympathy. It is Mother’s faith that keeps her head high up to the world, because she will not close her eyes till she embraces this son once more. To her faith, I bow on my knees. Mother, thank you. Oh, Mother, thank you.”

An excerpt from “Hwang Chin-i,” a novel by North Korean Hong Sok-chung, tells the story of a mythical gisaeng, a hostess in a traditional bar, named Hwang Chin-i. The excerpt recounts the passing of a funeral procession by Hwang’s house; the deceased was her spurned lover.

A crowd gathered to hear the tirade unleashed at Hwang by the lead mourner, whose job it is to voice the grievances of the dead. Hwang, in anticipation of this, throws herself on the coffin and attempts to reconcile herself with the spirit that had passed.

“‘Though I know you not, apart from a single glance that night, through your death I have learned of your ardor for me. Now that our paths have diverged, it is not possible for me to return your love in all its sincerity. But if perchance we were to meet again in the other world’ - and here Chin-i paused - ‘surely I would offer you recompense for your love that went unrequited in this world. As a token of my promise to you, I bestow on this your altar my wedding finery - understand me and receive it.’”

This quiets the crowd and the procession moves on, leaving Hwang to ponder her actions.

“It was perfectly clear to her that her action was not a matter of rashness or whim; instead, and most important, she had just bestowed upon this dead person’s soul every last ounce of love in her possession, and so until her life in the world was spent, she would be like stone or wood, absent this emotion that was love.”

Not only this account, but also the buildup to it is just enough to tease us and leave us wanting to devour the rest of the novel.