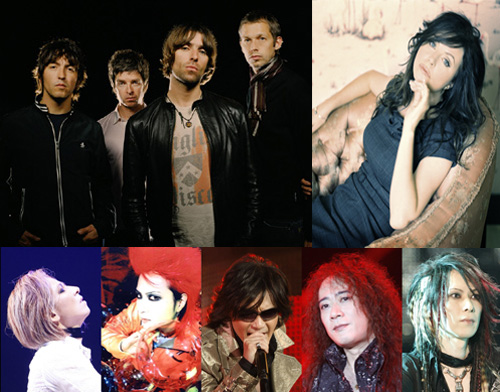 The foreigners are coming.
Popera diva Sarah Brightman, rock bands Oasis and X Japan plus jazz masters Five Peace Band and Fourplay are all chalked up for gigs in the first half of the year.
Although the economic recession has people tightening their purse strings, true music fans will probably splurge on tickets for decent concerts, all too aware that so few overseas rock and pop acts bother to play on the Korean Peninsula.
Even though some planned shows have been cancelled due to the unfavorable exchange rate, the lineup still looks pretty tempting.
In March, when spring makes its comeback, Scottish pop-rock band Travis, who dazzled Korean rock lovers at the Incheon Pentaport Rock Festival last year, will unleash their branch of alternative Britpop.
The band, which hails from Glasgow, was overwhelmed by the support of fans here last summer, as well as the searing heat.
This time Travis will perform at the Olympic Hall of Olympic Park on March 1, featuring songs from their latest album, “Ode to J. Smith,” among others.
Another Britpop act follows close on Travis’s heels.
Oasis will play on April Fool’s Day, following on from their highly successful sold-out concert here in February 2006.
Japanese rock band X Japan is due later in the year, in September.
The band’s songwriter Yoshiki pledged to perform in Korea on a visit here last September, and the band looks to be keeping the promise.
The band will hold its first-ever concert in Korea on March 21 and 22.
X Japan has been popular in Korea for many years, even when Japanese pop culture was relatively inaccessible during the early 1990s.
The band broke up in 1997, but reunited a decade later, minus Hideto “Hide” Matsumoto, who killed himself in 1998.
But before X Japan, another Japanese visual rock act will appear in Korea.
Gackt’s shows are schedules for April, but the exact dates have yet to be fixed.
Sarah Brightman, the star of “The Phantom of the Opera” and “Cats” who opened an era of popera with the song “Time to Say Goodbye,” is coming to town for the second time to perform in three cities between March 13 and 20.
The British soprano will present a super-scale concert this time. According to organizers, it took four years and a crew of 200 to put together the 3 billion won ($2.2 million) production.
R&B singer John Legend, who campaigned for U.S President Barack Obama with the song “If You’re Out There,” will be coming to Seoul for the first time to meet Korean fans.
His show will be on March 29.
Jason Mraz, who released his third album “We Sing, We Dance, We Steal Things” last year, will be underlining his affection for Korea, having been here twice last year, with another stop.
The young American singer-songwriter has chosen Seoul as the first destination of his 2009 world tour.
What better compliment is there than that?