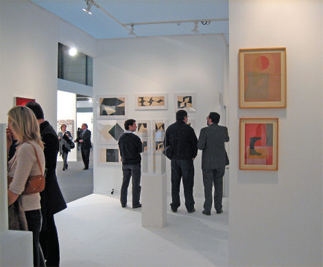 Art has its aesthetic pleasures but also its financial ones.

But if you’re going to invest, be very careful, says Steve Thomas, an art lawyer in Los Angeles, the United States.

Thomas, who has handled several record-setting transactions like the 2006 sale of Gustav Klimt’s “Portrait of Adele Bloch-Bauer I,” was speaking at a forum at ARCO titled, “The Art of Collecting Art.”

Although economic indicators and the latest auction results are heading southward, the forum was attended by dozens of visitors, listening to English-Spanish interpretations, taking notes, asking questions and seeking guidance.

This is perhaps because of recent reports suggesting that art investments could prove to be more lucrative than buying stocks.

ArtPrice, a France-based art market research company, says the price of contemporary art has risen by 12.5 percent in the last 12 months

But experts also advise caution, forecasting a slight correction in the market given the unfavorable economic circumstances.

On the topic of due diligence, Thomas says potential buyers must keep four things in mind: title, authenticity, condition and value. He strongly advises checking the condition of the artwork - whether it’s been restored, or may need restoration in the near future, which is often the case with contemporary art.

“Do your research,” Thomas says, “but don’t rely on just the dealers. A person selling to you is the last person you want to go to. Go to independent, disinterested individuals and parties.”

Janice Niemi, a former judge from the United States and a lifetime art collector of contemporary and folk art, suggests frequent visits to art museums.

“I never just walk into galleries and just buy. I almost always purchase things I’ve seen in museums,” she said at the forum.

According to data by ArtPrice, one can rarely go wrong with grand masters of the 20th century, big names that even the most clueless layman would recognize.

Their research suggests the artists who raked in the most profit in auctions are Andy Warhol, Pablo Picasso, Francis Bacon, Mark Rothko and Claude Monet, in that order.