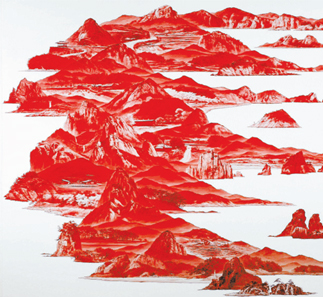 “Between Red 60” by Seahyun Lee, One and J gallery (Korea)

MADRID - “From Madrid to heaven, and in heaven a little window from which to see it.”

This local proverb is a clear indication of how dear Madrid is, and has been, for centuries to its people.

Spain’s capital since the 16th century, the city is rich in history, art and the energy and vibrancy unique to Latin America with which Spain enjoys special cultural ties.

In that sense, Madrid really is a dream city for historians, architects and of course, artists. Home to some of the most renowned artists and art museums of all time, Madrid makes the perfect venue for a world art fair.

ARCO, a major contemporary art fair held here, began 28 years ago. It has managed to grow into one of the major events on the world art circuit amid tough competition from established events like Art Basel in Basel, Switzerland, and Frieze Art Fair in London, the United Kingdom. 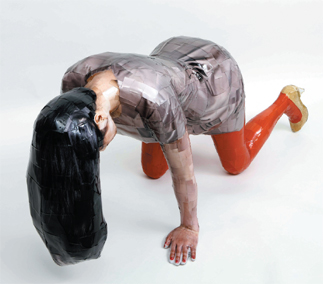 ARCO kicked off its 2009 edition last Monday under clear, blue skies with throngs of exhibitors, collectors and other visitors from all over the world flocking to the 1.4 million-square-meter (346-acre) Ifema convention hall.

But signs of the global economic crisis are evident. For starters, there is a notable decrease in the number of galleries taking part in the fair this year compared to last - 238 galleries from 32 nations, 57 less than 2008.

“This is a very special edition, one shaped by the current international climate,” Lourdes Fernandez, the director of ARCO, said.

“The latest indicators point toward moderate growth and a somewhat quiet market performance,” she added cautiously, explaining that there has been a downturn in the art market.

One of the trends at the fair as a result is new, younger artists working on a small scale, says Pilar Baselga, an art historian from Spain.

“Because of the crisis, there seems to be a shift from big, expensive works to smaller ones - smaller in size and price,” she said as she led a tour on the opening day of the fair.

Also interesting is the tendency to go back to art forms from the past - or “the old,” as Baselga calls them - like oil paintings and watercolors, she says. She points out a set of three small painting by Spanish artist Jeronimo Elespe on display, reminiscent of 19th-century paintings. 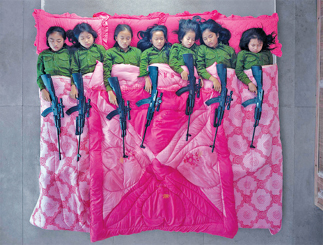 Another new star at the fair is photography, whose role in the contemporary art scene is more notable than ever, with some betting that it will resist the crisis the best.

According to ARCO organizers, the price of photographic works rose by 131 percent between 1990 and 2008 compared to sculptures, next in line with 55 percent.

A number of booths here are in fact dedicated solely to photography.

“Family III” by Serbian artist Marina Abramovic, whose frequent motif is war, is a staged shot of young girls sleeping with machine guns under pink blankets. The shocking image and bold statement has had many visitors at the fair stop and gaze for a moment in sheer awe.

Many galleries pulled out from participating at this year’s ARCO, resulting in virtually zero representation at gallery level by certain countries like Japan and Canada.

Three Korean galleries - Arario, Gana Art and One and J - did make it here, but are certainly feeling the impact of tightened purse strings.

“Many people have inquired about the pieces, but it seems they are more hesitant than before, taking extended time to make the decision to buy,” said Lee Jung-yong, director of Gana Art Gallery.

“The mood is certainly very different from the past few years.”

It is Gana Art’s third time at the fair since 2007, when Korea was the guest country.

Each year, ARCO chooses a guest country, which is given more exhibition space and puts on cultural performances. The guest country last year was Brazil.

Korea got unprecedented exposure to world art collectors that year, with 14 galleries and 38 artists taking part. Since then Korean galleries have continued to showcase their artists at ARCO, saying the gains outweigh the losses, in terms of money and much more.

“Pulling out from ARCO wasn’t even an option,” said Choi Jee-ah from Arario Gallery. “It’s a rare opportunity to introduce Korean art and young artists in an international setting.”

On the wide, white floor of the gallery’s booth is a striking work by Gwon Osang of a crawling woman with bright red nails and red stockings, appropriately titled “Red.”

While the striking color and glossy surface give off a fabulous gaudy image, the work at the same time exudes a humbling and even painful aura because of the woman’s posture. 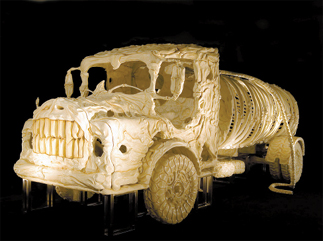 “For ARCO, we try to select works that can appeal to the international perspective, particularly those with a clear image, identity and color,” Choi said.

One and J Gallery, the third Korean gallery at the fair, is hoping to build more networks within global art circles. “If we think strictly from a business aspect, like the costs of booths, shipping and all, we shouldn’t take part,” said Park Won-jae with the gallery.

“But we see participating in ARCO more as a way to expose and promote our artists and their works, which could possibly lead to cooperation with international museums in the future.”

The gallery is displaying an installation called “Landscape” by Kim Jong-ku, who uses steel powder to create a calligraphic landscape on a floor. With video cameras hanging from the ceiling and a white screen on the wall, the images of the footsteps of passersby complete the work.

ARCO has sought to stand out from other major art fairs by paying more attention to emerging art markets in Asia. That is, of course, besides the obvious primary focus on Spanish and Latin American art.

ARCO organizers expressed their commitment to promoting Asian art, saying half of the world’s best-selling contemporary artists come from Asia. Organizers have selected India as the fair’s guest country this year, acknowledging the Asian nation’s continued appreciation of art as well as economic growth in recent years. Thirteen Indian galleries and 50 artists are taking part this year.

“I wanted to show that Indian art is on a par with art from the rest of the world in terms of ideas and imaginations,” said Bose Krishnamachari, who curated the exhibition of Indian art.