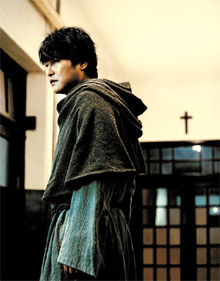 Song Kang-ho in “Thirst,” which was bought by a Romanian distributor at the recent Berlin International Film Festival. [JoongAng Ilbo]

Korean films made their mark at the 59th Berlin International Film Festival, which ended last Sunday.

Kim So-young’s “Treeless Mountain” won the Ecumenical Prize, while Lee Suk-gyung’s “The Day After” took the Network for the Promotion of Asian Cinema Award. Both are independent films.

Treeless Mountain portrays two young sisters growing up in the countryside. They have been abandoned by their mother, who does not have enough money to raise them. But their aunt, with whom they are sent to live, is an alcoholic.

The 89-minute film was first screened at the 13th Pusan International Film Festival last year, where it won the Network for the Promotion of Asian Cinema Award.

Treeless Mountain will be released in U.S. theaters in April.

The Day After tells the story of a divorcee’s life as she meets her soul mate.

Although these were the only two Korean films to win awards in Berlin, other Korean films screened during the festival left an impression as well, with several sold and exported at the festival site last week.

Action comedy “Chaw,” directed by Shin Jung-won, was sold to distributors in 10 countries, including Germany, India and Thailand. The adventure story revolves around a wild boar with cannibalistic tastes living near a peaceful town in Mount Jiri.

Other films sold included “Marine Boy” to Turkey, “Haeundae” to Turkey, Malaysia, Singapore and the Czech Republic, and “Thirst” and “Mother” to Romania.

Meanwhile, the main prize - the Golden Bear award for best film - went to Spanish-Peruvian director Claudia Llosa’s “The Milk of Sorrow.” The film received praise from festival judges for its detailed and emotional depiction of abused women during the turbulent 1980s in Peru.

The Best Actor Award went to Sotigui Kouyate from Mali, who starred in “London River,” a film depicting the 2005 terror attack in the London subway.

Austrian Birgit Minichmay took the Best Actress Award for her role in German drama “Everyone Else,” about an odd couple battling their way through a holiday together.