Korea’s favorite robot hero back from the ’70s

Korea’s favorite robot hero back from the ’70s 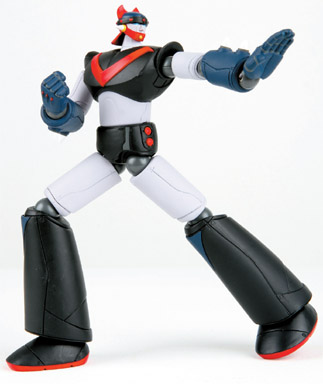 Back in the late 1970s, Robot Taekwon V, a super-sized robot fighting for justice and peace, was a national hero.

The star of an animated TV movie and a subsequent TV series inspired a generation, and so it’s no surprise that fans now in their 40s are looking forward to the release early next month of the latest “Robot Taekwon V” character.

These characters embody the in-depth story of a fantasy world, as seen in the homegrown hero, Robot Taekwon V.

“The character [Robot Taekwon V] was the best known and best loved,” said Hong Young-ki, the co-president of Neostorm Entertainment, the company that’s putting out the full action figure. 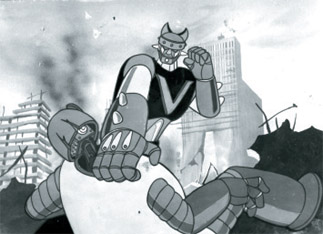 “The figure is versatile. It can move all its joints and make taekwondo moves,” Hong said with pride. It’s true: The robot can freely move its arms, wrists, legs, feet, back and neck.

To make the robot, Hong and his partner, Lee Jong-keon, bought a license from the Robot Taekwon V Company, which released a restored film of the TV animation recently.

The original Robot Taekwon V, which first aired in 1976, was directed by Kim Chong-gi and produced by Yu Hyun-mok.

After endless efforts, Dr. Kim completes his super-sized robot, Taekwon V, and gives it to his son.

The film inspired many sequels, but unfortunately, as time passed, the original copy of the movie was lost.

In 2003, a copy of the science-fiction animated film was discovered - though it was in very poor condition - and the two-year restoration work began.

At the 2005 Pusan International Film Festival, the restored animation was screened to delighted audiences, which accelerated the release of a DVD in 2007.

The live-action animation is currently being remade by director Won Sin-yeon and co-producer William Teitler, a Hollywood producer known for his work on “Jumanji” (1995) and “The Polar Express” (2004).

With a budget of 20 billion won, the film will be released next year.

“One of the reasons for putting out the Robot Taekwon V action figure is to celebrate the film’s release,” Hong said, noting that it’s simply the start of inventing many more figure serials.

“The local figure industry has been dominated mainly by items from Japan, Hong Kong or the United States,” he said. “But it’s our [Korea’s] turn now.”

When the animated film was digitally restored and released in theaters in 2007, Robot Taekwon V Company had also released the robot figure.

“The 1,976 limited editions signed by director Kim Chong-gi sold out within 40 hours,” he said.

The price of each figure has leaped 10 times from two years ago.

The current industry exceeds 4.41 trillion won with around 38 billion won spent on figures, according to the Korea Culture and Content Agency. “There are a growing number of fanatical figure collectors,” Hong said.