If music be the food of love, try a Baroque dish

If music be the food of love, try a Baroque dish 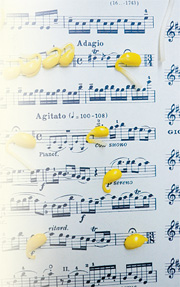 What possible relationship can there be between music and food?

According to Ensemble Il Barocco, a group of Korean musicians specializing in Baroque music, quite a lot, if history is any indication.

Looking at the European classical music scene between the 17th and 19th centuries, music was an important part of royal banquets, and so the food was a source of inspiration for musicians.

Members of the ensemble, together with music critic Jang Il-beom, will walk audiences through the “alleged love affair” between cooking and composition at an upcoming concert in Seoul, “School Classics: Delicious Concert.”

On the musical menu will be Telemann’s Tafelmusik Quartet in D minor. Tafelmusik refers to music from 16th and 17th centuries used as background music for royal feasts and banquets in European households.

“The ensemble will play the kind of music that Baroque European nobility listened to when they were eating and drinking,” said Song Jung-jin, the organizer of the Delicious Concert. “And Jang will detail what kind of music went best with what kind of food.”

The programs also includes some of Bach’s cantatas, which were dedicated solely to coffee, a beverage introduced to Europe from Africa around the 17th century.

So, as a bonus, audiences will find out more about the history of a favorite drink in Korea while listening to Ensemble Il Barocco play the cantatas on the program.

In addition, the organizers will give talks on the musical instruments used in the show and Baroque etiquette.