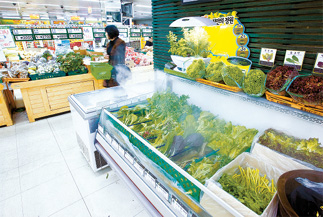 Step into Noreunja, which means “egg yolk” in Korean, and the first sensation you feel is the chill. The market doesn’t have proper heating and refrigerators are virtually everywhere, keeping their assorted veggies cool and fresh. Those are the very products that saved the mart from the brink of bankruptcy earlier this decade.

Opened in 1981, Noreunja was a typical grocery supermarket. It became incorporated in 1990, and by 1995, four stores around Seoul operated under the Noreunja brand.

But by 1999, E-Mart, currently the nation’s largest discount chain, opened a branch in nearby Yeoksam area, and Noreunja’s flagship store suffered. Koh Chang-hwan, who became the chief executive of Noreunja Shopping Inc., in 2002, said, “We had to do something, so decided to become the market that could supply safe food.” Noreunja began to specialize in organic items. Today, it has a separate section for 500 kinds of organic products, from fresh vegetables, soybean paste and hot pepper paste to “green” toothpaste and shampoo.

But it wasn’t always so easy. Customers weren’t willing to pay extra for ugly fruits and vegetables. For nearly four years, the market had to chuck out 70 percent of organic products that were left unsold.

To turn things around, the market assigned employees to promote organic foodstuffs and ensure their safety. Lee Gye-song, a senior executive of the company, recalls venturing out to farms late at night “like an undercover agent, to see if anyone sprayed chemicals on farms in the dark.”

Their efforts have paid off. “At a small market like this, I get only what I absolutely need. It’s smaller but it still has everything I need,” said Shin Hyun-woo, 27.