Quality food at a premium in Yeonhui-dong

Quality food at a premium in Yeonhui-dong 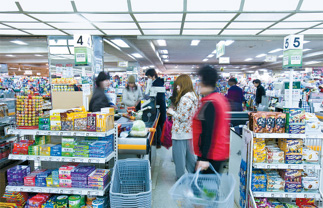 Shoppers at Yeonhui’s Sareoga Shopping, which has been in the same spot for more than four decades.

This market has stood on the same ground in Yeonhui-dong since 1967, and the mall’s chief, Yoo Ho-jang, has one simple goal.

“We don’t want our neighbors to go shopping out of town,” said the 43-year-old owner of Sareoga, which translates into Korean literally as “Let’s go shopping.”

When the store first opened 40 years ago, it was considered a major shopping center in the capital. There was an optical shop, a drugstore, a stationery shop, a bakery and some 40 other shops there. But it is the only one of its kind in the neighborhood today.

Lee Hye-jae, who has run Sareoga Fruits and Vegetables inside the market for a quarter of a century, said the entire supermarket stresses quality, even if it means higher prices. It’s because most customers in Yeonhui, one of Seoul’s wealthier areas, are the demanding sort.

“Patrons here never complain about prices as long as the food tastes good,” Lee said. “If not, then we’ll hear about it.”

Yoon Mi-gyeong, a housewife in Yeonhui, said she’s willing to pay for delicious and safe food.

“In this day and age, it’s nice to have a supermarket that sells things you can trust,” she said, referring to the series of food safety incidents over the past year.

Rather than trying to stay competitive with prices at large discount stores, Sareoga stocks its shelves with organic vegetables, fruits and dairy products from environmentally friendly farms. And at the end of the day, it comes down to the quality.

“When you come to our market, we want to make sure you have absolutely no doubt about the superiority of our products,” said Kim Jong-gwon, manager of the supermarket.