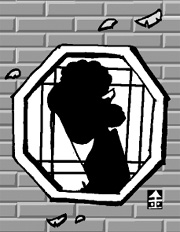 Only skin-deep
The eunuch Li Yannian, a talented musician during the reign of Emperor Wu (157 B.C. ?87 B.C.) had a younger sister named Li Yan who was considered a stunning beauty.

One day Li Yannian wrote a song to mark the occasion of the emperor’s 50th birthday. “A beautiful woman lives in the northern lands,” went the lyrics. “She lives in a hermitage. When she turns and looks toward the city, the castle caves in. When she turns to look again, the entire country collapses.”

Clearly, she must have been quite a looker, so striking that with just a glance she could force soldiers garrisoned in the castle to drop their weapons, and another glance to shake the entire country.

“There can’t be such a beautiful woman in reality,” said a flustered Emperor Wu, but Li Yannian promised him such an attractive woman did exist and he quickly introduced the country’s ruler to his sister.

When he first set eyes upon her in his royal court, the emperor was completely smitten. The rumor passed down over ages claims the emperor bestowed the young woman the title Lady, gave her a job in the women’s quarters and failed to show up three early morning meetings in a row.

This story exemplifies a Chinese saying that a woman’s beauty is so powerful that she can capture an emperor’s heart and render him incapable of handling state affairs, which could lead to a country’s downfall.

However, Li Yan’s glory didn’t last so long. A year later, she gave birth to a son but suffered postpartum complications that eventually led to her death.

The emperor must have been devastated. He visited Li Yan’s room while she was sick, but she hid her face from him. The emperor begged her to show her face to him, but she kept herself hidden, embarrassed to show her husband how much the illness had ravaged her.

Did she realize the limits of her appearance? Did she want her husband to remember her for her beauty so he would take care of her son if she died?

Li Yan was a wise woman because she knew how fickle men could be over looks, an attitude that’s hardly ever changed in human history.

These days the popularity of the TV series “Boys over Flowers” and girl band Sonyeo Sidae (Girl’s Era) underlines the status of good looks in our society. Women are crazy about pretty boys, and men adore women’s good looks, a pathetic state of affairs. It seems that this country is more interested in looks than the economic crisis engulfing us.

This obsession with looks is a disease, and it’s spreading, with more people than ever it seems worried about the surface rather than what’s inside.

Korea is known as the republic of plastic surgery, so isn’t it time to put a stop to our fixation with appearances in these challenging economic times?