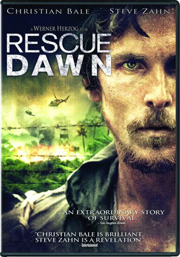 Christian Bale as Dieter Dengler in “Rescue Dawn,” based on a true story.[MovieWeb]

“Rescue Dawn” is based on the experiences of U.S. Navy pilot Dieter Dengler in the Vietnam War.

When he was 18, Dengler (Christian Bale) emigrated to the United States from Germany to fulfill his long-cherished dream to be a pilot.

After volunteering to join the air force, he’s shot down over Laos on an illegal bombing raid.

Despite his best attempts to evade capture in the steaming Laotian jungle, Dieter is eventually picked up by members of Pathet Lao, a communist group closely associated with the Viet Cong in Vietnam.

The prison where Dengler is incarcerated, after serious torture, is hidden deep in the forest.

His companions are six other American prisoners, all of whom have pretty much given up hope of ever seeing the U.S. again.

Dieter, as the rookie jailbird, refuses to accept defeat and he sets about planning a bid for freedom.

He devises a plan to walk to the Thai border, ignoring the warnings of the others inmates that even if he gets past the guards, surviving alone, and barefoot, in the jungle is a death sentence.

One other prisoner decides that teaming up with Dengler is better than wasting away in the bug-infested prison, and the two slip behind the guards.

Wearing only one worn-out rubber shoe each, they fight Mother Nature at her most temperamental, despair, Viet Cong and Pathet Lao patrols, mozzies and near-starvation.

At the heart of the movie is Bale’s pulsating performance. I’ve never been disappointed by Bale in any film he’s made, whether it was as Batman in “The Dark Knight” or a folk singer in “I’m Not There.”

In this role, the Welsh actor immerses himself deeply in the role of the German-born U.S. pilot, but this is not a typical “mission accomplished” film.

Thanks to director Werner Herzog, Rescue Dawn is a realistic portrayal of a man fighting for his life and avoids becoming a “never-die hero.”

I think it’s also smart to avoid pronouncing judgement on the Vietnam War.

After almost three decades, still obsessing about the Vietnam War can sound worn out.

It only focuses on the human story, and doesn’t make anyone out to be a hero, or right or wrong.

However, the movie is inevitably kinder toward American actions in Indochina since the illegal bombing run through Laos that would end with Dieter’s capture is not criticized in any way.

We also don’t get to hear the story of the Pathet Lao troops, which would have added more balance to the tale.