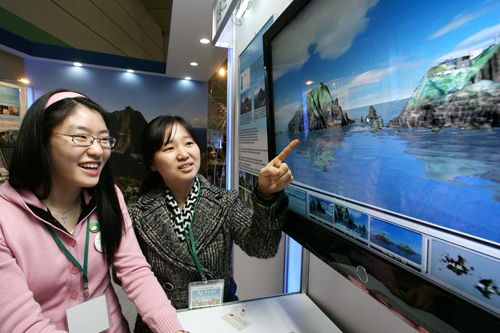 Yoon Ji-hye (left), a volunteer at the Dokdo islets exhibit, discusses Dokdo images with a fellow volunteer. By Kim Hyon-dong

Given the grim state of the economy, downgrading that trip to a luxury resort in Southeast Asia to a less ostentatious local destination seems like a sensible choice, unless you are rececession-proof, or you just don’t care.

To get some tips on what’s new and where to go in Korea for your holidays, it’s worth checking out Korea Travel Expo 2009.

The event kicked off yesterday to tunes played by a five-piece brass band and, inevitably, a B-boy group performance. It continues through Sunday at COEX in Samseong-dong, southern Seoul.

The massed booths offer up sample sights, sounds and tastes from around the country, and with travel agents and regional representatives blaring out their travel wares, the atmosphere is much like a weekend market, with piles of brochures and TV screens replacing the produce stalls.

“We’re the first non-government organization to hold such an expo, and we have tried our best to prepare a meaningful event with lots of information,” said Shin Joong-mok, Chairman and CEO of KTA.

Now in its sixth year, the expo is the largest of its kind in Korea, and this year it’s gotten even bigger.

Booths offering foods and drinks from different regions across the nation are on the left, and in the middle of the hall there are booths promoting regional destinations and goods.

The main theme of this year’s expo is, as you might have guessed, “Green Tourism,” an effort to get urbanites out of the smog and into the countryside.

“We’re hoping to introduce as many people as possible to the delights of regional locales, such as farms and villages where you can get a glimpse of the traditional agricultural culture that dominated Korea until relatively recently,” said Hong Jin-young of the Korea Tourism Association’s PR department.

In addition to Green Tourism, this year’s expo also features some special sections.

One is on Dokdo, providing a historical background on the islets’ tempestuous story that’s been the focus of a row between Korea and Japan over its ownership.

Another special section focuses on Taean County, South Chungcheong, which was hit by a tragic oil spill in December 2007.

The exhibit features photos of the mass cleanup effort and activities that showcase the attractions of the area.

There’s a small aquarium containing shellfish and crabs from seas around the county plus an area where kids can build sand castles.

“Taean County is close to returning back to normal, but some people might still be concerned about the pollution from the oil spill of 2007. So we want to reassure visitors that the area’s 32 beaches, the most in Korea, are worth visiting, as are numerous fresh seafood festivals held throughout the year,” said Moon Tae-joon of Taean County. 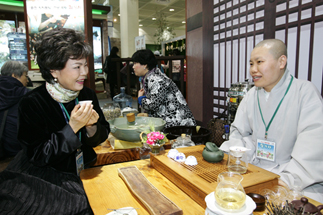 A visitor shares a cup of tea with a monk at the temple-stay booth.

There’s also an exhibit of photos of royal palaces in Seoul where you can make rubbed copies of traditional tablets and listen to lectures.

This booth has been organized by an NGO called The Rediscovery of Korea, which arranges guides to take visitors round the royal palaces and Jongmyo, a Confucian shrine in Jongno, central Seoul, where memorial rites for the kings and queen of the Joseon Dynasty (1392-1910) used to be held. 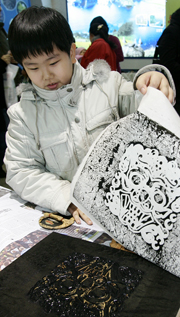 A child rubs a copy of a traditional tablet at the booth on royal palaces in Seoul.

This is a great opportunity for representatives from around Korea to pitch their tourism offerings to Seoulites, drumming up support for regional delicacies and interest in their region’s history, culture and customs.

“The total number of visitors to Jeju Island was roughly 5.8 million last year, and we are targeting 6 million visitors this year. While there are several events and festivals planned, the number of honeymooners visiting Jeju Island has increased significantly. We hope to market packages to attract more newlyweds,” said Ko.

Gangwon is promoting its rail bike trail, a Winter Olympics photo zone and a fishing game with giveaways, while South Gyeongsang has a bamboo flute making activity, among others.

Boryeong, South Chungcheong, widely known for its annual mud festival, offers visitors a chance to get mucky by trying their mud massages. Sample mud-based cosmetics are also being given away.

A temple stay booth set up by the Cultural Corps of Korea Buddhism is offering samples of temple cuisine, hanji (mulberry paper) and ceramic pottery making, among others.

“We had a total of 120,000 visitors last year with roughly 30,000 of that number from abroad. The Cultural Corps of Korea Buddhism also organizes one-day stays and tea drinking experience for visitors. Even eating and drinking tea can be considered a part of meditation as we provide well-being, green and slow food to our visitors. I’d say roughly 70 percent of foreigners who participate in our program leave impressed,” said Cho Soo-hyeon of Cultural Corps of Korean Buddhism’s Planning and PR Team.

Don’t forget to check out the booths designated for regional cuisines, with some of the most interesting being from Ulsan on the east coast. Be prepared for whale meat as well as other seafood. Hongseong, South Chungcheong, offers a variety of hanwoo (Korean beef) dishes including hanwoo yookhwe, or raw beef and sushi.

To be honest, there are way too many individual booths to list. But rest assured, you won’t be bored. With 490 booths to choose from, you should be able to find something you like.

The expo was crowded on its opening morning mainly with an older crowd.

“I came to the expo to get some information on Jeju Island and came away impressed with the information being provided by other booths. I live in Gyeonggi Province and didn’t realize there were interesting destinations such as Pocheon, not too far from home,” said Lee Gyeong, a mother of two from Yongin, Gyeonggi.

“I have been in Korea three months and I like Korea very much. I find the food a bit different but the people are friendly and hospitable. It’s hard to point out a particular destination right now but I am definitely interested in visiting some of the places represented here today,” he said.

Some regulars spotted changes to the expo this year.

“This is my second time visiting the travel expo and this year’s event is offering food from various regions and the temple stay booth, which is new, was very interesting,” said Yang Jae-ah, a mother of two from Seoul.

After browsing through the expo, if you’re still uncertain about where to visit or how to go about organizing a trip, representatives from travel agencies offer English packages.

“We have several packages designed for foreigners, which are detailed in our English language booklet. The economy being the way it is at the moment, there is an increased number of people, a roughly 20 percent increase, signing up for domestic tour packages,” said Oh Jung-chan from Hana Tour.

English-speaking KTA staff are on hand to provide information and help to visitors. Visitors can also check out some of the pamphlets available in English for a basic introduction and layout of the expo.