Humble Mass for a special Cardinal

Humble Mass for a special Cardinal 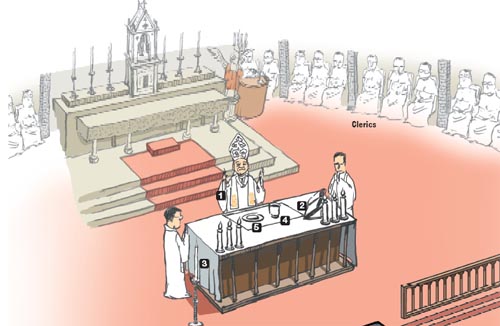 The funeral Mass for the late Cardinal Stephen Kim Sou-hwan will be held today at Myeongdong Cathedral in central Seoul in the modest and unassuming manner that Kim had asked for before his passing on Monday. 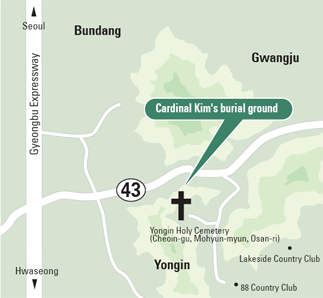 The Roman Catholic Archdiocese of Seoul’s Father Huh Young-yeop, in charge of media relations for the funeral Mass, said early yesterday that organizers wanted to close the cathedral to mourners after midnight Thursday, though they “had no desire to impose any strict rules on time.”

Huh said he expected the service to end between 11:30 a.m. and noon. He said about 800 people will be in attendance, plus 90 others taking part in the funeral. The majority, he said, will be clerics, while about a hundred will be invited guests. 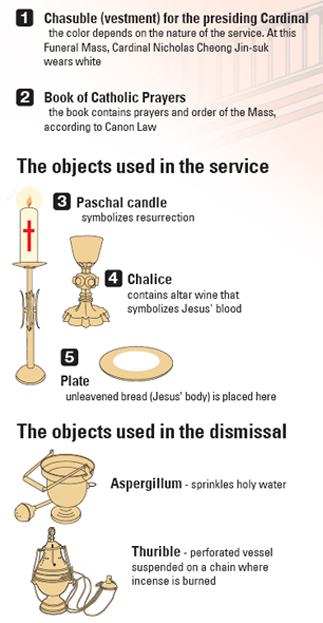 A multivision screen has been installed outside the cathedral so the public can view the ceremony, according to Huh.

The late cardinal’s body was moved from its glass case to a casket yesterday at 5 p.m. Huh said the procedure lasted about 10 minutes. It was the last opportunity for the public to see Kim’s face.

Huh said Kim doesn’t have any personal belongings inside the casket.

He said Kim had wanted an ordinary funeral and the Mass will be similar to those for other members of the clergy.

The Mass will begin with introductory rites, followed by the Liturgy of the Word, with readings from the Bible. The Liturgy of the Eucharist will follow, and the concluding rite will include the blessing and dismissal.

Kim will be buried beside Archbishop Paul Ro Gi-nam at Yongin Holy Cemetery, about an hour’s drive southeast of Seoul in Gyeonggi.

The hearse will be accompanied by vehicles carrying surviving family members and members of the clergy.

Huh said Kim wanted to bow out much the way he lived his life: unpretentiously.

“We chose a regular coffin, made of Japanese cedar, because it’s ordinary,” Huh said. “He wanted to keep things simple.”

While the government is considering a memorial hall for the late cardinal, Huh said building one would go against Kim’s dying wishes.

“We haven’t given it any serious thought,” Huh said. “[His] belongings are stored at a small hall at Catholic University of Korea’s College of Theology [in Hyehwa-dong, central Seoul] and perhaps we can expand that a bit.”

Another of the Cardinal’s wishes was to donate his organs. His eyes were removed shortly after his death and Huh said the corneas, which doctors said were in good condition, have been given to two patients, one for each.

“Hopefully, this will encourage others to become organ donors,” Huh added.