A third cardinal for Korea

A third cardinal for Korea 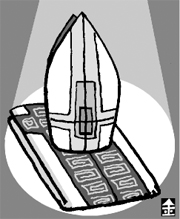 Pope John Paul II appointed four cardinals in pectore, without declaring their names, during his pontificate but we only know the identities of three. They were priests who live in a country where the Church might be politically persecuted.

In pectore literally translates as “in the heart” in Latin; the appointees’ identities are known only to the pope. If he does not reveal their names, their cardinalate ceases upon the appointing pontiff’s death.

Cardinals in the Catholic Church wear scarlet garments. Popes are elected by the College of Cardinals meeting in conclave when the Apostolic See falls vacant. The right to enter the conclave of cardinals that elects the pope is now limited to those under the age of 80.

The word “cardinal” derives from the Latin cardinalis, which derives from cardo-dinis, meaning “the hinge of a gate.” It used to be possible for someone who was a bishop, a priest or lower-ranking deacon to become a cardinal.

During the Second Vatican Council in 1963, Pope John XXIII decreed that only bishops or clergymen of a higher rank could become cardinals.

Especially during the 16th and 17th centuries, the custom flourished by which a pope would name as his chief minister a nephew or similar relative who was elevated to the rank of cardinal.

The word nepotism derives from the Medieval Italian word nepote, or nephew. Popes’ nephews had a free hand over conclaves, and were sometimes appointed pope themselves.

The last papal conclave was convened in April 2005 and elected Joseph Cardinal Ratzinger as the 265th pope with 84 out of 114 votes. He is now Pope Benedict XVI.

As Cardinal Kim Sou-hwan had reached the age of 80 by then and Cardinal Cheong Jin-suk was only elevated to the cardinalate in 2006, neither of them participated in the conclave.

Endless lines of mourners waited outside Myeongdong Cathedral to express their grief at the death of Cardinal Kim Sou-hwan, because he was a great figure who embraced the lonely and wiped their tears, rather than rest on his authority. He has also left a significant legacy in the democratization of Korean society.

It would stand to reason that we can now voice the need to fill the void that he has left with a third cardinal.

The Korean Catholic Church has a history of 200 years and more than 4.8 million believers. Therefore, two cardinals would not be an inordinate request.