Modern Korean designs make it in the Big Apple

Modern Korean designs make it in the Big Apple 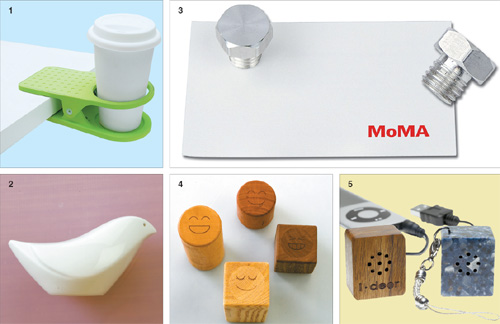 Feb. 10, 2009, will go down as a significant day for the Korean design industry. Seventy-five products designed by Korean artists went on display at the Museum of Modern Art’s Design Store in New York City. The design shop, home to assorted products ranging from books to furniture to accessories, and also a tourist attraction in the Big Apple, is the perfect place to showcase Korea’s talent in design.

The shop’s Web site (www.momastore.org) features the ongoing display of Korean products on its opening page. The exhibit is part of MoMA’s “Destination: Seoul” project.

Destination, which was launched in 2005, selects a country or a city twice a year, and displays products that show distinctive aesthetic sensibilities of each place with a modern spin. These products, all designed by local artists, are sold through the design store. Finland, Denmark, Buenos Aires, Berlin and Tokyo have previously been featured.

6. Spooner Bottle Opener. By Second Hotel. Inspired by Koreans’ habit of opening bottles with a spoon, this quirky spoon has an opening on the bowl. 20,000 won.

Seoul was selected as the next destination in November 2007. Five months later, the Destination Seoul Committee was founded to prepare for the MoMA display. A Korean credit card company, Hyundai Card, is running MoMA’s online shop in Korea and was responsible for organizing a contest to select the best design and for shipping the selected pieces to New York.

MoMA made the final cut of 75, as their curators and retailing department went to work. The focus of their judging was on the story behind the design, the products’ practicality and their Korean identity.

And these products do offer a glimpse into Korean culture.

Take the Spooner Bottle Opener, for instance. It’s a spoon with a twist - it has an opening on its shallow oval bowl like a regular opener. Credited to the design group Second Hotel, this opener was inspired by Koreans’ use of regular spoons to open beer bottles when an actual opener isn’t within reach.

The Carp Keychain was chosen as the carp symbolizes career advancement and success in Korean culture. A white paper napkin features drawings of a spoon and chopsticks - when Koreans eat out at restaurants, one of the first things they do at the table is to place those utensils on a napkin.

Practicality was also highly valued, and products that were only pleasing to the eye didn’t make the final cut. The ceramic Tea Mug has a small, v-shaped indentation along the rim to catch the string of a tea bag. The pet nail clipper has an adjustable dial on the side so that you can set how much of the nail you want to trim. Among other practical ones are a bag made of discarded street banners and a card case made from an old leather sofa. 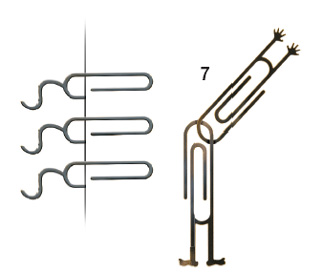 7. Fairytale Bookmark Set. By Suh Jin-sun. A set of five stainless clips includes two with feet, two with arms and one with a tail. 20,000 won.

Identity was the tricky category. Products that showed off traditional patterns or colors in straightforward fashion were ousted. Hyundai Card’s Lee Mi-young, who observed the judging process, said a modern twist was considered important.

“Products that put the traditional in the modern context were chosen,” she said. “In other words, they had to be something that had Korea written all over it without losing the modern sensibilities.”

8. Recycled Newsprint Pencils. By Park Hyun-jung. The case and five pencils are all made from recycled newspaper. 4,000 won per set. All photos by Shin In-seop

These products will make their way to Korea. Starting next Tuesday, they will be on display at Hyundai Card’s Finance Shop in Gwanghwamun and Myeong-dong, central Seoul, and Yangjae-dong, southern Seoul. They will be on sale at the Korean MoMA online store at www.momaonlinestore.co.kr.

2. Bird Salt and Pepper Shaker. By Daniel Jo. A dishwasher safe product made of porcelain. It comes with a blue, cloud-shaped shaker (not seen) and is 35,000 won.

3. Bolt and Nail Magnets. By Kim Dai-sung. Aluminum magnets that aren’t actual bolts or nails. Each set of three magnets is 7,000 won.

4. Wooden Blocks Rattle Set. By Song Jae-keun. Made from natural wood, the blocks each have different faces and sounds. 19,000 won.

5. I.Dear Speaker. By Kim Sang-bum. Mini cube-shaped speakers made of wood or faux marble, which include a USB connector for charging and standard jack for audio sources. 25,800 won for wood and 28,800 won for faux marble.