Glimpses into the souls of great men

Glimpses into the souls of great men 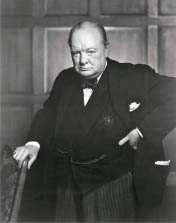 If you were to choose the most important figure in Karsh’s career, Winston Churchill (1874-1965) would be near the top.

The two first met in 1941 during the early years of World War II.

Churchill, then the prime minister of the United Kingdom, had visited Ottawa in Canada to give a speech at the Canadian Parliament. Karsh, who had immigrated to Canada in 1924, was there to record the moment.

“He was in no mood for portraiture and two minutes were all that he would allow me as he passed from the House of Commons chamber to an anteroom,” Karsh wrote in “Faces of Our Time.”

“Two niggardly minutes in which I must try to put on film a man who had already written or inspired a library of books, baffled all his biographers, filled the world with his fame, and me, on this occasion, with dread.”

After the speech, Churchill entered the room, puffing a cigar, which Karsh thought was unsuitable for the picture. So the photographer instinctively removed his cigar.

But at this, “the Churchillian scowl deepened, the head was thrust forward belligerently, and the hand placed on the hip in an attitude of anger,” as Karsh described it in written books. This was the moment when Karsh pressed the camera shutter.

Churchill later told Karsh: “You can even make a roaring lion stand still to be photographed.” 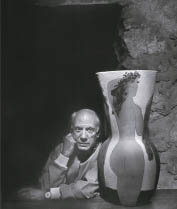 Karsh remembered the moment he visited Picasso’s house as a nightmare. The master’s house was full of noisy children bicycling around rooms that were crowded with canvases. Without stepping further into the room, Karsh asked Picasso for an alternative place to take a photograph. The two later met at a nearby ceramic gallery.

When Karsh arrived at the gallery, the owner said Picasso would never show up, considering his busy schedule. But to everyone’s surprise, Picasso did turn up. Karsh noted the artist was “quite gentle.”

Karsh wanted his shot to stand out, so he posed the artist with a ceramic vase painted with a female figure. Karsh was aware that the painter had done a series on the female form in the early 1930s. 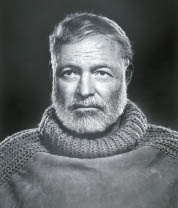 Standing side by side with Karsh’s work of Churchill is his portrait of Ernest Hemingway (1899-1961). Karsh visited Hemingway in Havana, Cuba in 1957, four years before the author killed himself.

“I expected to meet in the author a composite of the heroes of his novels,” Karsh said. “But I found a man of peculiar gentleness, the shyest man I ever photographed - a man cruelly battered by life, but seemingly invincible.”