History through one man’s lens

History through one man’s lens 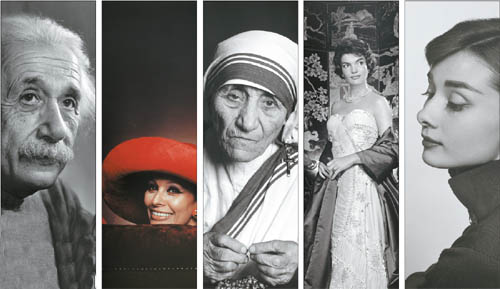 Some may argue that there’s an element of luck in producing great art.

But to Armenian-born Canadian portrait photographer Yousuf Karsh (1908-2002), his art was never fortuitous.

He clearly understood what he was seeking to achieve and when it was there, he recorded it.

The photographer once said that his chief joy was in photographing the great in heart, in mind and in spirit. During his six-decade career, Karsh took photographs of 15,312 accomplished men and women and developed 150,000 negatives.

Of these, around 70 portraits will be displayed at the Hangaram Art Museum in the Seoul Arts Center, southern Seoul, beginning next Wednesday.

It will be the first time that Karsh’s works are exhibited here.

His portraits stand out in that his works convey not only his famous subjects but also their living environments.

This aesthetic can also been seen in the works of photographers August Sander and Arnold Newman.

“Within every man and woman, a secret is hidden, and as a photographer, it is my task to reveal it if I can,” Karsh wrote in his book “Karsh Portfolio” in 1976.

“The revelation, if it comes at all, will come in a small fraction of a second with an unconscious gesture, a gleam of the eye, a brief lifting of the mask that all humans wear to conceal their innermost selves from the world. In that fleeting interval of opportunity the photographer must act or lose his prize.”

But why now, and why in Korea?

“The local arts industry has been booming, and there have been many major arts exhibitions, most of which were dedicated to Western paintings,” said Ahn Sun-young, the exhibition’s visual arts programming manager.

“But there is also a growing interest in photography here, with an estimated 5 million amateur and professional photographers. So it’s a good time for this unique collection of Karsh’s works.”

The exhibition is divided into three sections: “Portraits,” an artistic and historical collection of records of the men and women who shaped the 20th century; “On Assignment,” a collection of works that document Canada’s postwar life; and “The Early Years,” a display of his early experimental and improvisational works from the early 20th century.

All the photographs on display are original vintage prints.

“Karsh was a man with initiative and drive,” said photographer Lim Young-kyun, recalling the moment he met Karsh in New York in 1982.

Lim had gone to the United States to study photography. Karsh was one of his lecturers.

“He was progressive, which is the most important element in a photographer,” he said, adding that Karsh constantly searched to record the diverse expressions of renowned figures.

In fact, when former President Roh Tae-woo was scheduled to go to Canada on an official visit in the 1990s, Karsh called the Blue House six months prior to the trip, and asked for access to the banquets and dinners to take photos of Roh.

The Blue House accepted his proposal but the visit was later canceled. Unfortunately, there are no Korean figures captured by Karsh.

“Many Koreans think of portrait photography as commercial,” says Kim Jong-sae, the head of the Korea Camera Museum.

“But that is never the case. Rather, it is a form of recording history.”

In fact, Kim says “the interest in photography, especially portraits, will grow even more.”