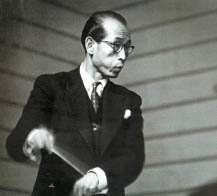 Ahn Ik-tae, the composer of the Korean national anthem, photographed by Limb Eung-sik in 1955;

Countless photographers have been inspired by Yousuf Karsh’s commitment to his art. Among them are five Korean photographers - the late Limb Eung-sik, Yook Myong-shim, Park Sang-hoon, Lim Young-kyun and Kim Dong-wook - whose works will be among some 20 portraits of inspirational figures in an upcoming exhibition.

In particular, Limb (1912-2001), known for his portrait of Ahn Ik-tae, who composed the Korean national anthem in 1955, produced work that reflect realistic moments of history and truth.

Photographer Kim Dong-wook, well-known for his black and white photographs, is presenting a portrait of the late poet Pi Chon-duk, taken in 2002. It was shot five years before the poet died of old age.

“I was fortunate to meet the late poet,” Kim reminisces. “I was excited and nervous at the same time to capture the image of such a great master of the century, but his warm smile relieved me. He didn’t seem close to 90 years old. I saw the smile of a little boy.” 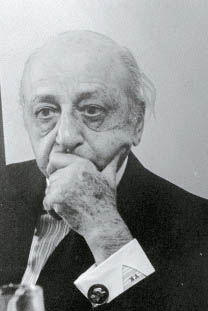 At right is Yousuf Karsh, taken by Lim Young-kyun in 1982. Provided by the organizer

Lim Young-kyun is a professor of photography at Chung-Ang University. One of his must-see works is a portrait he took of Karsh in 1982 in New York. That day was a turning point in his career, Lim said.

“When I graduated from university, and before I left the country for New York for further study of photography, I had a fixed image of artists in mind,” he said.

Lim imagined that artists, like those who appeared in local television dramas and films, “wore felt hats, enjoyed smoking and drinking and were conceptual and abstract.”

But meeting Karsh changed all that. Lim was struck by how many artists, like Karsh, are in fact methodical and thorough about their works and lives.

Park Sang-hoon, whose works complete the Karsh exhibit, says portraits allow every figure to find his or her true self. Park is known for his portraits of Korean celebrities, including actress Jeon Do-yeon and actor Ahn Sung-ki.

“I try to capture the most human moment of these figures,” he said.