Statistics use and misuse

Statistics use and misuse 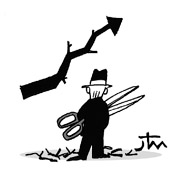 If Austrian priest Gregor Mendel (1822-1884) had stopped his preoccupation with garden peas at breeding and experimenting, his work may not have had the same impact on the world of genetics.

Mendel studied pea plants for 15 years to expand on his hypothesis that certain traits in these plants follow particular laws of inheritance. He recorded his findings of variations in numerical order for statistical analysis. His findings went largely unnoticed by his contemporaries who were ignorant of statistics.

But scientists rediscovered his ideas at the turn of the 20th century, posthumously giving him the title “the father of modern genetics.”

The principle of heredity was not the only thing Mendel’s followers uncovered from his studies.

They discovered disparity in the result ratios, raising suspicion that Mendel may have censored his experiments to validate his hypothesis or excluded results that would contradict his earlier belief.

English mathematician Charles Babbage in his 1830 book “Reflection on the Decline of Science in England,” said there were three kinds of fraud scientists can commit: cooking, trimming and forging.

In “cooking,” scientists take in only the results that fit their theory, discarding others. “Trimming,” which Babbage considered more evil, is an act of smoothing irregularities in order to make the data appear extremely accurate and precise.

Such fabrication and rounding of numbers until they fit the desired result are rampant in social statistics.

In “Secrets and Lies,” British journalist David Southwell revealed that the numbers of the homeless suddenly dropped in early 2000 because the government official in charge of investigating had crammed homeless people into facilities to report lower numbers.

Kevin Phillips, who served as an economic brain in the Richard Nixon administration, exposed the Nixon government for excluding food and energy prices in calculating the consumer price index in order to report a more positive economic indicator.

Economist Steven Levitt in his best-selling nonfiction book “Freakonomics” cites a cheating incident in Chicago schools. Due to the city government’s policy of punishing teachers with pay and promotion disadvantages based on school reports, the teachers fabricated students’ test results.

School cheating has also made news here. An elementary school in North Jeolla Province has omitted poor test results while some schools have either exempted school sports team athletes from tests or gave them favorable terms in order to report higher school performances to authorities.

The cooking of test results won’t disappear until society looks beyond mere numbers.