Beefcakes roll over for slim Jims

Beefcakes roll over for slim Jims

If you’re a guy hitting the gym hoping to develop bulging biceps and six-pack abs, you’re behind the times.

Perhaps you might want to peek at the television just once while you’re doing your arm curls and see all those “lean and mean” television stars.

Slender is now the ideal body type for men. Trainer Yoon Hyung-min, from the Marriott Hotel’s fitness center in Yeouido, Seoul, said men have been trying to slim down for some time.

“Before, about 80 percent of people who came here wanted to get muscular,” he said. “But these days, seven out of 10 say they want a slimmer body.”

The 23-year-old actor Jeong Dong-jin is among several entertainers joining the fray. Once clad in muscle, Jeong has cut down his body fat, a transformation that his personal trainer Byun Geon-woo said was due to a “hard-core” diet.

“Now men go on a diet with just as much vigor as women,” Byun said.

And it isn’t only men in their 20s trying to shed pounds. Yoon Oh-wang, a 43-year-old assets manager who has been working out with a personal trainer for the past year and a half, joined a gym to correct his posture. But as he started losing weight, Yoon said he grew more confident and began working out in earnest.

“People think I look 10 years younger,” he said. “I’ve got a 30-inch waist and I can fit into just about anything off the rack.”

If you’ve read this far, you might be wondering how you look in the mirror. Perhaps that New Year’s resolution about losing weight has come back to haunt you. 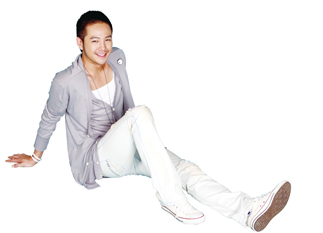 With lean, long limbs, actor Jang Geun-seok (182 centimeters, 66 kilograms) looks great in almost anything. His broad shoulders are accentuated by his 71-centimeter waist.

Or, if you’ve spent years building muscle, you might tell yourself, “O.K., now what?”

And that may not be the last question you find yourself asking. Just how lean do you have to get? How should you go about it?

Not having the time or the money to sign up for a gym is no excuse. There are plenty of exercises you can do at home. All it takes is planning and commitment.

Tight, form-fitting clothes have done their part in pushing men to slim down. Dior Homme got the ball rolling in 2004 with slim clothes that women could have fit into and local brands have followed suit. General Idea and Mvio were two casual lines to do so, and suit makers also came up with designs that stressed silhouettes.

There was no longer room for men’s flab.

Seo Joon-seong, a 23-year-old university student, signed up at a gym two months ago because he wanted to fit into some new clothes. He went from 97 kilograms (213.8 pounds) to 89 kilograms but hadn’t given much thought to his weight because he didn’t consider himself too heavy for his height, until one day he had an epiphany. 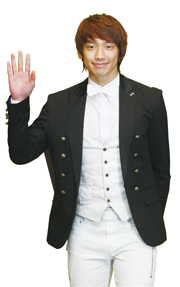 Muscular at first, Rain (184 centimeters, 74 kilograms) has become leaner. He looks to have lost substantial weight, but still boasts that impeccable six-pack.

“I tried putting on a large pair of pants, and they were 31 inches,” Seo recalled. “I wasn’t even close to fitting in them. And all my trendy clothes are like that.”

Seo says he’d like to get his weight down to 77 kilograms. He pictures himself walking down the street in skinny jeans.

Popular entertainers have affected the trend, too. Last year, the singer Rain returned with a leaner body. When donning body-hugging suits, he appeared more natural and no longer looked as though he was about to burst out of his pants. Trainers and stylists agreed Rain had the best body in the industry.

He’s an average build, at 177 centimeters tall (5-foot-10) and 68 kilograms. But he’s putting in his time to be more like those lean TV stars.

“For a while, I thought these guys were way too skinny,” Han said. “But now, I think they cut a pretty good figure. Even on blind dates, girls prefer slender guys to big ones.”

Kim Hyun-jung (180 centimeters, 68 kilograms), one of the stars of the hit TV drama “Boys over Flowers,” has a surprisingly solid body. By Kwon Hyouk-jae

Of course, slender doesn’t always mean bony. You have to have muscles in the right places, especially on your chest and shoulders. Rather than rippling biceps, try for thinner, longer muscles with more natural curves.

Chun Sang-jin, a professor of sociology at Sogang University, has two theories on the shift in the body-type trend. First, he thinks women now have a bigger voice in what they want to see in their men, and “they have specific demands on men’s body types.”

Secondly, he thinks Korean society is highly sensitive to images delivered by the media, and that we as a people tend to want to realize the “idealistic image” of TV personalities.

Idealistic or not, if you want to achieve a trim figure, you need a two-step plan of weight training and diet.

First, you have to build muscle mass by lifting weights. Cut down on white rice and go with potatoes and sweet potatoes for lower carbohydrates and higher fiber. Get your protein from chicken, beans and eggs.

Once you have mass, it’s time to start lifting lighter weights with more repetitions. Cut your carb intake in half and double your protein.

Yang Hyung-gi, a trainer at World Gym in Jamsil, southern Seoul, stressed the importance of first building muscle mass. “Lifting light weights without that foundation won’t let you bulk up.”

You can get into shape by adjusting your posture, too. Do some stretching, or take Pilates.

Similar to yoga, Pilates helps you build core postural muscles. Get in your exercise three to four times a week for six months, minimum.