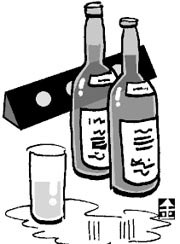 It’s not surprising that so many politicians have been suspected of being alcoholics considering the high stress levels involved in handling state affairs. Winston Churchill, the British prime minister during World War II, sipped watered-down whisky all day long, a substance his daughter called “Daddy’s cocktail.”

He was also known to drink a bottle of Champagne at lunch and dinner, then later at night, a quart, close to a liter, of brandy. People around him told him to cut down on his drinking but he ignored their advice, saying alcohol was also food. Surprisingly, however, there are few records of drunken behavior. It is said that his parents taught him that nothing was more embarrassing than appearing drunk in public. He surely drank but knew how much he could handle.

However, not all politicians can control themselves like Churchill did. Two out of the three leaders of the Allied forces during World War II had drinking problems. Joseph Stalin, the leader of the Soviet Union, and American President Franklin Delano Roosevelt would drink so heavily that they had to be carried to their beds. Even while being carried to his bedroom, Stalin reportedly hit his aides with a stick and angrily accused them of stealing his drink.

But the late Russian President Boris Yeltsin is hard to beat. At a welcoming ceremony when he visited Germany in 1994, he jumped onto the stage, danced, sang and conducted a military band. And that was just the tip of the bottle. In the same year, when he flew to Ireland he was so drunk that he couldn’t get off the plane and was unable to attend a summit meeting.

During a banquet with a pope, he made a toast to his “love of Italian women.” He once even drummed on the bald head of Kyrgyztan’s president using wooden chopsticks.

Shoichi Nakagawa, Japan’s former finance minister, has recently joined the list of politicians with drinking issues. He appeared to be quite intoxicated when he attended a meeting of finance ministers and central bank governors at the G?7 summit in Rome last week. The video clip of him talking absurdly and dozing quickly circulated on the Internet, creating a storm of criticism which forced Nakagawa to resign.

The Japanese public’s fury is understandable as the top finance leader went abroad and became a laughingstock at a time when the country’s economy is struggling with the worst negative growth ever. The scandal over the finance minister’s drunken behavior has now led to calls for the prime minister to resign and the Liberal Democratic Party’s half-century rule to end. The party now prohibits its members from drinking even at dinners.

However, one is usually more in the mood for drinking when one has more stress. We’ll see whether the new measure works or not.