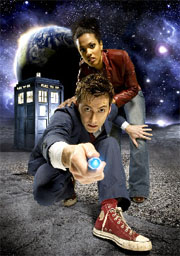 “Doctor Who,” a British science fiction television show, is low on tech but high on drama. [JoongAng Ilbo]

He travels through time - forward and back - to save the world from nasty aliens and other creatures.

Who? Well, he’s simply known as The Doctor, and his fanbase in Korea is multiplying rapidly.

As season three of the British sci-fi drama draws to a close this week on Fox Channel, the number of dedicated fan blogs has reached the 60 mark. 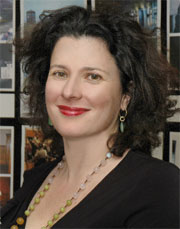 “It’s a very universal drama,” said Julie Gardner, 40, the executive producer of the third season of Doctor Who, in a recent telephone interview.

Yet the show, which Fox has been broadcasting from Monday to Friday at midnight throughout February, looks old-fashioned. It is nothing like the modern American science fiction drama series that feature advanced computer graphics and special effects.

“If you have a good story that appeals and reflects the human condition, the story can travel the world,” explained Gardner, who also produced “Torchwood” and “The Sarah Jane Adventures,” two spin-off series.

“The need to talk to other people and share experiences is intrinsically human. The subjects of romance, love, danger and moral choices transcend individual cultures,” she added.

Doctor Who, which debuted in 1963, is an integral part of British culture. Scottish actor David Tennant plays the title role in the series currently airing in Korea.

The Doctor, who is 900 years old, is a Time Lord from a race of people capable of traveling to any point in time and space.

And his vehicle of choice is the Tardis, which looks like a 1950s era blue police box.

It’s not only in Korea, though, where the show has been gaining in popularity since it was revamped three years ago, having been off air in the U.K. since 1989. So far, the new Doctor Who show has been exported to 40 different countries.

Gardner says one of the most exciting aspects of making a science fiction show is the license to transcend time and space, “putting a different spin on a certain period of history.”

So in episode two of season three, for example, The Doctor and his companion Martha Jones (Freema Agyeman) travel back to Shakespearean times and meet the Bard himself.

The episode is filled with lines from Shakespeare’s plays, lots of jokes and literary allusions.

“I characterized Shakespeare as a working writer struggling with words, who doesn’t know his own greatness and who is chaotic,” said Gardner, adding that part of the appeal is also the moral core of the show.

“It’s about how you face dilemmas, deal with threats and the choices you make under huge pressure,” she said.