It is often the case that childhood memories last longer than those we create in adulthood, especially when it comes to television shows or manga series.

And if you were to choose one recollection that captured the attention of couch potatoes here, “Dragonball,” a Japanese manga by Akira Toriyama first serialized in 1984, would surely be one of the top choices.

In answer to the prayers of many fans in their late 20s and early 30s, the manga is coming alive next month in film form, with the title “Dragonball: Evolution.” 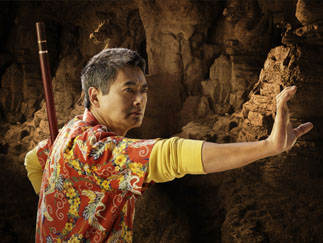 Though the film is based on the manga series and boasts a massive fan base, Wong is hoping for a wider audience.

“The goal [of the film] is to introduce Dragonball to a new audience as well as satisfy the demands of fans of the manga series,” Wong said during a press conference last Wednesday at the Shilla Hotel in central Seoul.

The conference hall reflected the popularity of the manga: Not only was it packed with Korean and foreign journalists, but fans had also gathered outside in the hope of catching a glimpse of one of the stars, who were in town to promote the film.

“The manga is very long,” the director said. “So there’s no way to put all that in the movie.

“[Instead] we focused on one period, the time of Goku [the main character], to allow young people to relate [to him] the most,” Wong added.

He said he hopes to make a sequel depending on how well Dragonball: Evolution does at the box office.

The film opens on March 12 in Korea and Japan, and on April 8 in the United States.

The film revolves around a teenage Goku (Chatwin) who takes off on an adventure with Master Roshi (Chow), Bulma (Rossum), Yamcha (Park) and Chi Chi (Chung).

The purpose of the adventure is to collect seven mystical, orange-colored balls, known as Dragon Balls, which make your wishes come true.

If they fail in their quest, evil Lord Piccolo (Marsters) will use them to conquer the world.

“In the comic book series, Goku is 7 years old and fights midgets all the time,” said Marsters.

Borrowing his words, the film “muscled [Goku] up.”

In fact, Canadian actor Chatwin, 26, who plays Goku, was skeptical about his role, considering himself too slender for the part.

“I was looking in the mirror, going like, ‘I’m a beanpole, how can I pull off this role?’” he admitted.

He noted that behind the excitement and honor of playing the main role remained the dread and fear of pulling off the icon he grew up watching.

The training, he says, involved vomiting when “the trainers pushed him too far.”

Nevertheless, “Goku is a symbol of good.”

“All that we hoped to do was to preserve the essence of Dragonball - the fun, the thrills the adventure,” Wong said, wrapping up the conference.

More than 500 episodes have been published of the Japanese manga, which sold more than 150 million copies and raised total sales of $4 billion.