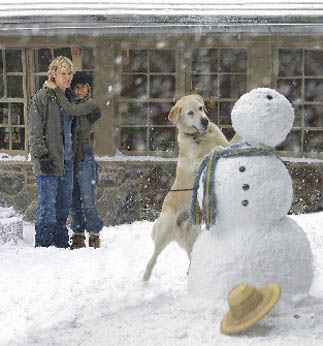 Marley the Labrador makes some additions to his owners’ (Owen Wilson and Jennifer Aniston) snowman. [MovieWeb]

The dog: man’s best friend, companion to the lonely, child substitute. An animal so delightful and so important that news of a future White House puppy made it into President Barack Obama’s acceptance speech.

The film “Marley and Me” is a victory for anyone who classifies himself as a Cat Person. I imagine, Cat People, that you will watch this film with a smug grin, thinking how independent and well-behaved cats are in comparison to the rollicking, rampaging star, Marley.

Marley, for all his golden cuteness, is naughty. Really naughty. So naughty, in fact, that he comes to embody all the hapless mania of a human relationship. He is destructive, uncontrollable, has boundless energy and the mischief of a voracious, fat toddler.

He does the Grogan family a great service; he creates so much havoc and demands so much attention that any quarrel or lovers’ tiff is nothing compared to the challenge of looking after him.

The title really could have been “Taming Marley: A Tale of Emotional Transference, starring 22 Different Dogs.” Did you know that? Twenty-two different dogs play Marley throughout the film.

Somehow I feel betrayed by this. Marley - darling, disastrous, destructive - is not at all what he seems. Imagine if they switched Jennifer Aniston and Owen Wilson around with a bevy of nearly identical actors throughout the movie! Their credibility would dissipate, the film would devolve into a postmodern mess of identity crises and audiences would feel disoriented.

As it is, there are several instances where Marley, this hybrid of many pets, is wearing a collar in one shot and not in the other. Too distracted by this small glitch in continuity, people may not realize that another diva dog star has just been released from its glitzy trailer and swiftly switched with its predecessor in the role.

Clearly, training one dog to master the role on his own proved to be every bit as tricky as training the character Marley in the movie, even with Kathleen Turner’s help.

Jen and Owen try to outshine Marley. They’re charming and watchable, as ever. They’re likable actors, their onscreen chemistry is temperate but believable, and they are certainly bankable enough to make this movie a box office hit. Try as they may, Jen and Owen don’t quite trump all the Marleys in their disastrous cuteness.

Liking a movie usually hinges on your preconceived notions of what it will be like. Most of us decide whether we’ll like something before we even buy the ticket.

As long as you don’t expect too much from this film, you will like it. Turn up to the cinema when you’re in the mood for a light, bubbly, familiar, family-friendly flick and you will leave having seen exactly that.

Turn up wanting anything more, and you may well leave as a Cat Person.