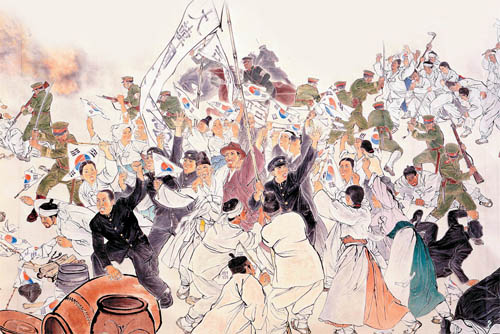 The March First Movement, portrayed in the background, led to numerous other uprisings in other parts of Korea in the following months. [JoongAng Ilbo]

Korean society during the Joseon Dynasty (1392-1910) was marked by division. There was segregation between the classes, or the ruling yangban and commoners, and another cleft between men and women, to name a few.

But in the ninth year of Japanese colonization (1910-1945), rich and poor, men and women, learned and illiterate, and young and old united with one voice.

The March First Movement and subsequent protests elsewhere were, scholars say, the first major movement in Korean history to embrace all groups of society.

“It is said that all classes of the population are taking part,” reported The Washington Post on March 17, 1919.

“The movement is notable for its extent rather than its violence,” the newspaper read two days later.

Park Yeong-ok, the president of the March First Women’s Association says that “everyone took part in the movement, and that it was everyone’s mission.”

Kim Hee-gon, a history professor at Andong National University, agrees, saying, “The level and scope of participation indicate that the protests in spring that year were the first step toward Korea’s modernization and democratization.”

It’s been 90 years since Korea was shaken with shouts for independence, and the accounts are getting muddier with the passage of time.

To highlight stories of average Koreans who took part in the movement and subsequent demonstrations in other parts of Korea, the JoongAng Daily focused in on three groups in society - students, farmers and gisaeng (female entertainers) - and spoke to those who know best what happened during that time of upheaval and change.