Gisaeng took to streets against Japan

Gisaeng took to streets against Japan 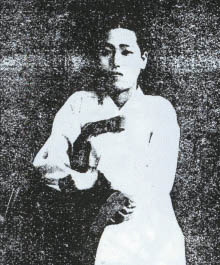 Lee Dong-geun, a historian at the Suwon Museum, has been fascinated by the role that gisaeng, female entertainers, played in independence movements that started after the March First Movement.

“The participation of the gisaeng is significant because after that all classes in Korea started to join in,” Lee argues.

The gisaeng demonstrations in Suwon, Gyeonggi, impress Lee the most, the historian said. According to his research into Japan’s documents of the time, about 30 gisaeng were on their way to regular medical checkups on March 29 when they instigated a street protest, shouting “Long Live an Independent Korea” in front of the Jahye Clinic.

Documents show that a Kim Hyang-hwa, 22, led the uprising. She and others, aged 15 to 23, were arrested and sentenced to six years in jail.

“What’s most interesting about this incident is that Jahye Clinic was right in front of Suwon Police Station. The gisaeng knew they would get arrested and punished, but they were undeterred,” Lee said.

Gisaeng were very nationalistic at the time, Lee said, citing contemporaneous newspaper reports. When King Gojong, the 26th king of the Joseon Dynasty and the first emperor of the Korean Empire, died on Jan. 21, 1919, gisaeng closed their workplaces and mourned in white clothes.

Although gisaeng are not prostitutes, they were treated as such by Japan’s colonial overlords.

“[They] were arrested after their protest, but merchants, laborers and students took to the streets to support them, showing solidarity among the Korean people,” Lee said.