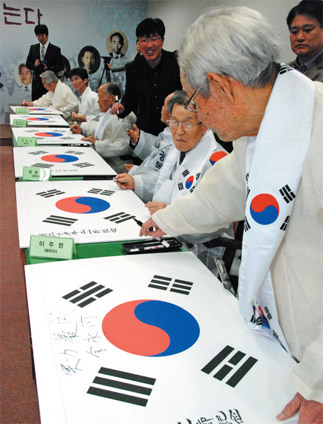 The day seemed to begin like any other. Darkness gave way to the morning sun, people awoke and prepared themselves for the day ahead.

But this would be no ordinary day. March 1, 1919 would be immortalized in history textbooks and remembered in Korea with immense pride as the start of Korea’s fight against Japan’s colonial rule (1910-1945).

Ninety years later, historians are still debating the significance of the movement, arguing that it should be viewed not simply in the context of a national uprising but as part of a global anti-colonial movement that grew out of the ashes of World War I.


A Declaration of Independence

Overnight, a band of students put up posters along the streets, signs that dared to declare to the world that a new dawn was breaking over the Korean Peninsula: an end to Japanese colonial rule and the rebirth of an independent Korea.

“We take this step to insure to our children for all time to come, personal liberty in accord with the awakening consciousness of this new era,” announced the 33 religious leaders who signed the Proclamation of Korean Independence at Pagoda Park in downtown Seoul.

“A new era wakes before our eyes, the old world of force is gone. ... On this day of restoration, we desire a full measure of satisfaction in the way of liberty and the pursuit of happiness,” they continued.

After the declaration had been read out in full, the crowd cheered and took to the streets, hailing “Long Live an Independent Korea!”

The incident led to a string of demonstrations across the country over the subsequent months. About 2 million people reportedly took part, of whom 47,000 were arrested, 16,000 injured and 7,500 killed.

The March First Movement, now celebrating its 90th birthday, failed in the sense that Korea didn’t secure independence until 26 years later, when Japan surrendered to the Allied forces in August 1945.

Historians are trying to interpret the March First Movement from a global context rather than a national one. The uprising was reported in the overseas media, as shown in the photograph (above), when it erupted in 1919. [JoongAng Ilbo], Independence Hall of Korea

Historians today are looking at the movement from more than a nationalistic context. They highlight the impact of the uprising by considering the dynamics of imperial powers of the day and their colonies. 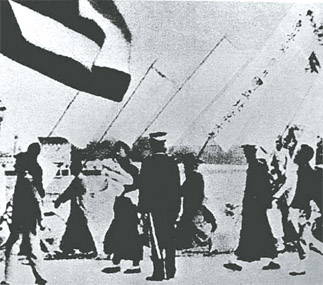 Some historians argue that Korea’s March First Independence Movement set the tone for independence movements in other countries, like the May 4th Movement in China, pictured above. Provided by the Independence Hall of Korea

Akifumi Nagata, a history professor at Sophia University in Japan, conducted an extensive study on the Korean independence movement, authoring the book “Japan’s Rule of Joseon and International Relations,” which was published in Korea last year.

Kim Hee-gon, a history professor at Andong National University in North Gyeongsang, attributes the high levels of interest to the timing of the uprising.

“Nineteen-nineteen was an important year in world history,” Kim says. “The first round of territorial disputes among the imperial powers had just wrapped up. And the new international order was forming in favor of the victors of World War I.”

Kim will be giving a lecture at an academic forum on March 9 marking the 90th anniversary of the March First Movement. It will be held at the Korea Chamber of Commerce and Industry building in central Seoul and hosted by the Northeast Asian History Foundation.

Also, in January 1919, the Paris Peace Conference opened, Kim explained. This was a meeting of the Allies following Germany’s defeat in World War I to set peace terms.

At the conference, U.S. President Woodrow Wilson proclaimed his “Fourteen Points,” which included the idea of self-determination, an inspiration to the authors of Korea’s declaration.

Experts claim the leaders of the Korean independence movement deemed March the most opportune time to voice their longing for freedom to the world.

According to Kim, several countries suffered at the hands of imperial powers during this period in history, including India, Indonesia, the Philippines and Vietnam.

Korea stands out because it organized such a huge and well organized anti-colonial protest despite its relative lack of resources.

Historians note that the March First Movement was followed by similar demonstrations in other colonies.

“If you look at March 1st in Korea and expand your frame of reference spatially, an extraordinary confluence of events comes into view,” said Erez Manela, a history professor at Harvard University at a conference earlier this month at Sungkyunkwan University on the historic rally 90 years ago.

Manela pointed out, just as the student demonstrations that erupted in Seoul lasted through the spring, similar street protests erupted in Egypt less than 10 days later in its struggle against its British occupiers.

Local historians, led by Kim of Andong University, who is also the director of the Andong Independence Movement Memorial, argue that the March First Movement deserves a spot in world history, not just Korean history, lamenting that even world history books published in Korea fail to mention the movement.

“What’s most unique about the March 1st Movement is that it’s a catalyst for the creation of modern society in Korea,” Kim said. “It has all the elements of a people’s uprising in modern society - nonviolent, involving all classes, religions, ages and genders and with the basis on the concept of humanitarianism. In that sense, it is a model movement in world history.”

Manela agrees, saying that viewing the event from an international perspective is valuable both for comparative and for integrative purposes.

“Examining March 1st in its global context helps us to work out the details of one of the central processes of the history of the past century: how the global combined with the local to produce the national across a broad swath of humanity,” he said.